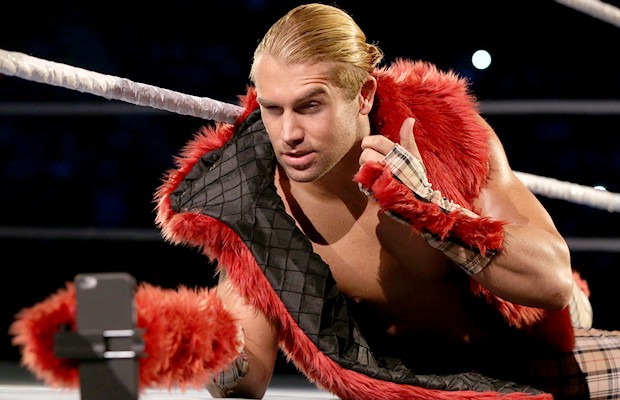 Longtime NXT fans have noticed that former favorite Tyler Breeze appears to have fallen out of favor on WWE television over the past month. His entrances have stopped being televised, he isn’t currently in a storyline and he and valet Summer Rae were unceremoniously split up. Dave Meltzer reports in the latest Wrestling Observer Newsletter that Vince McMahon’s lack of belief in has ended his push.

According to Meltzer, Triple H (who has long been a staunch supporter of Breeze) did his best to protect Breeze on the main roster. Triple H wanted to bring him in as a top-tier heel on the level of Dolph Ziggler, which McMahon initially agreed to (and is why the two men were paired together in Breeze’s first main-roster program).The program started by pushing Breeze strong, but McMahon wasn’t convinced and stopped his push immediately.

Breeze’s woes continued Saturday at WWE’s live event in New Delhi, India as he lost twice within a matter of minutes, to Titus O’Neil and Darren Young. Here is a recap from PWTorch.com:

(5) Darren Young beat Tyler Breeze via pinfall. Breeze attacked Young as he was entering the ring for heel heat. The bell rang after some time. Both of them worked a while for only about three to four minutes. Still, there were some audible “boring” chants. Darren Young then rolled up Breeze for the win.

Breeze then asked for the mic and gave a heel promo about not leaving India as a loser. This drew loud “loser” chants. He challenged anyone backstage to come out for a fight. Again, PTP’s music hit and Titus O’Neil made his entrance. Breeze again attacked Titus as he was entering the ring.

(6) Titus O’Neil beat Tyler Breeze via pinfall. They traded blows for a minute and then Breeze went for a clothesline, which was reversed by Titus for a sit-down Spinebuster. He covered for the win.

Really disappointing show of Tyler Breeze who was squashed twice in a row. Any legitimacy he garnered yesterday by having a tremendous match against Dolph Ziggler was washed away.