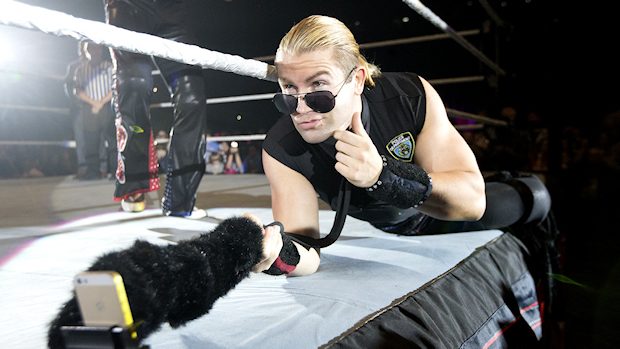 On Twitter, Tyler Breeze responded to fans expressing frustration with the WWE current product and his run on the on main roster. This began after a fan reacted to a video saying NXT Superstar The Velveteen Dream would be ruined on the main roster, saying he would “be another Tyler Breeze.” During another exchange, Breeze responded to a fan saying WWE is “wasting” him and how he should be in the main event wrestling for titles.

It would be another tyler breeze. 🙁

Another Tyler Breeze? I wonder if people realize… I was never “ruined” on smackdown live… and am currently buying my 3rd house… being another Tyler breeze sounds pretty solid 😏 https://t.co/TExtONcxVX

Yeah we know. We've heard it a million times from others. The talent these days is only concerned with the size of their wallet, and less concerned on the quality of their character. Blah blah blah…

You’re tellin me if u got Tyler Breeze vs AJ Styles u wouldn’t be glued to your screen? Because that’d be nothin but quality from both of us. As fun as it is to risk our health every day for pessimists like u.a lil💰to survive and stay healthy for u goes a long way. Anythin else? https://t.co/ms2PNUcym6

Yeah. You know how they often say in sports, "look at the scoreboard"?!…

Look at the ratings..

sorry I forgot you’re the expert? C ya at wrestlemania when there’s thousands of ppl there to enjoy themselves and u can sit by yourself judging each match and character and how much better things used to be btw I’ll still sign your shirt for u when u stand in line for axxess 😏 https://t.co/axaGjzGAvG

Translation: "We can put out as shitty of a product as we want and you'll still watch because there's no competition anymore"…

There’s been matches this year that have had me wrapped up in it watching backstage and had people in full arenas standing on their feet. If to u that’s “shitty” than there is no pleasing you so respectfully You choose to be unhappy and I’m sorry to hear that https://t.co/aBa3ALQiAN