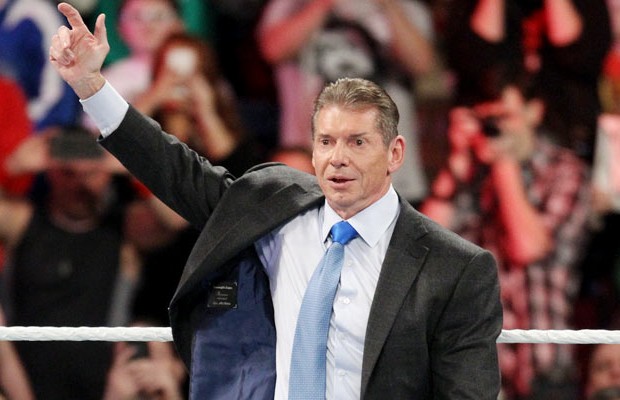 – The Muscle & Fitness website has published the Q&A they did with Vince McMahon for the recent issue that featured him on the cover. We previously recapped highlights from the Q&A but here are a few that we missed:

M&F: What is your advice for sticking it out in hard times?

VM: I think you have to develop an attitude. From the severity that I experienced, taking numerous beatings and things of that nature, I developed a defensive philosophy that has served me very well through the years. That is: If I lived through whatever the adversarial position was, I won. No matter what happens, if I’m still breathing in and out, I won. So if you have that kind of philosophy, then failure is not a big thing.

M&F: What is your fitness and nutrition regimen like these days?

VM: I’m still making gains. Very, very slow gains [laughs], but I am, and that’s something you can do for the rest of your life. If you train as a lifestyle, it helps you through everything. My training has evolved. When I worked out with [bodybuilder] Steve Stone, he had an old-school philosophy of just get the weight up. It doesn’t matter how you do it, just get it up. And with that philosophy I got a personal best of a 700-pound squat for three reps when I was 60-something, and that was after a double quad tear. That was an arena injury [not training related].

What I do now with Mike Monteforte, my trainer…I don’t really have a trainer. We train together. He is my trainer, but we train together. I don’t like people saying, “Come on! You can do it.” It makes me want to rack the weight and say shut up. Mike’s training and technique are totally different from Steve Stone’s. Mike’s technique is one of safety, which is so important. His philosophy is, don’t do anything where you can get hurt. You can do a max, but you really have to work into it. I recently had a resurfacing of my left hip, so I’m at a 560 squat now, and our goal is to get back up to 600.

M&F: That’s an incredible number for someone at any age.

VM: Age really doesn’t have anything to do with it. I’ll be 70 in August. I had a personal best a few weeks ago on the incline Hammer Strength machine. I did five reps with 450. It’s important to make gains, but it’s important to be safe. If you have an injury in the gym, it sets you back so much it’s not worth whatever gain you were going to make. That’s why strict form is so important. It’s about form, not the weight.

M&F: What are you eating?

VM: I look at eating as fuel. I’m not that conscious of the protein I eat, but I know it’s a lot. I think cheat meals are very important, so I do it about once a week. When you cheat, go for it. It’s important from a psychological standpoint. Oreos are my favorite cookie. I’ll eat an entire box. And my philosophy is that the body can assimilate only so much in a given time. If you have two or three Oreos every day, not good. But if you eat an entire package of Oreos at one time, it’s OK. It just passes through. I’ll eat pasta loaded up with meat sauce. Pizza. All the carbs you stay away from normally, load ’em up. I will gorge. It’s almost like I will force-feed myself on a cheat meal. And afterward I think, “Oh, my God, I don’t want to feel like this.” So it gets me back in the frame of mind immediately after the digestive process to do the right thing.