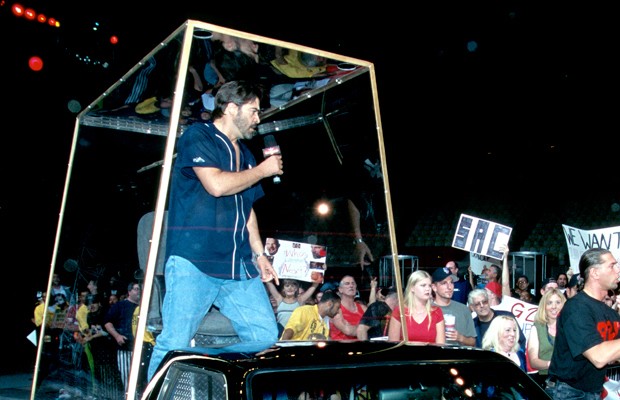 – Vince Russo has a new blog on the Chairshot Reality website where he says Vince McMahon has forgotten how to make stars when discussing WWE NXT Champion Kevin Owens confronting United States Champion John Cena on RAW. The full blog is at this link but here’s part of what Russo wrote:

When Sami Zayn first came out to the WWE Universe on a national stage . . . there was no IMPACT—the guy was presented as just “another wrestler”. I don’t care what anybody says, in a year nobody will remember that debut. Prior to that that was the Ascension—that was so laughable you “almost” have to think it was intentional. That was followed with Adrian Neville . . . WOW . . . that guy can really get height off the top. You forgot it by the next week. Then of course, this week there was Kevin Owens. A guy who looked like he just came from Gleason’s Gym, where he was training to be a “rassler”. Owens didn’t look like a star, he didn’t smell like a star, as a matter of fact he looked like a guy that could have possibly jumped the guardrail. Which reminds me—I STILL REMEMBER Hillbilly Jim when he was “presented” as “somebody” the first time we saw him on WWE TV. And, Owens dropping Cena? That did nothing but make the 115th time World Champ look bad.

Save your hate mail. This isn’t a Kevin Owens thing, just like it wasn’t a Sami Zayn thing, just like it wasn’t a Adrian Neville thing, just like it wasn’t an Ascension thing. Those guys are strictly employees who get paid to do what the boss says to go out and do—that boss is Vince McMahon. Somewhere along the line, shortly after the Attitude Era (what a coincidence), Vince McMahon forgot how to make stars. He forgot how to create them, how to manufacture them, and how to get them over. When you think about it, who has gotten over to SUPER stardom in the last fifteen years? I’m talking household names? In my opinion that list is quite small, as a matter of fact I’d put two people on it—-Kurt Angle and John Cena. OK, I’ll even allow you to put the beloved Daniel Bryan on there if you wish—but his success had NOTHING to do with creative, other than being given the platform to perform.

All right, I can hear you already, what about Orton? What about Punk? What about them? Great wrestlers, great performers no doubt—household names? Austin/Rock/Mick/Taker/Michaels/Hart worthy? Come on, be honest with yourself. Over the last 15 years, we have seen our share of great performers in the WWE, but not 100% bona-fide superstars. And, those guys, more, or less, did it on their own. What did Vince McMahon give Randy Orton? The moniker of “The Viper”? Maybe—but, even that I doubt. What got CM Punk over to the level he was? Simple? Him sitting on the stage with a microphone and cutting a promo that only he could cut—there was no help there from Vince on that one.