Will Ronda Rousey Still Appear At House Shows During Her Suspension From Monday Night Raw? 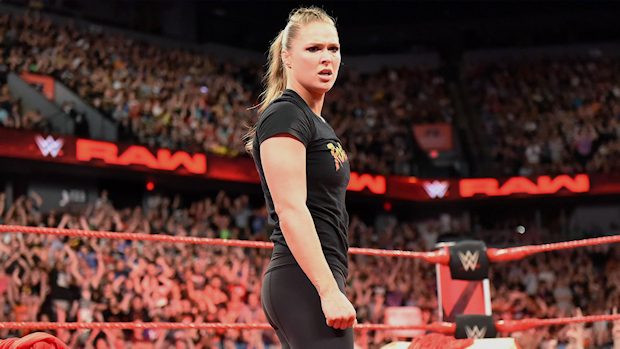 A storyline suspension will keep Ronda Rousey from appearing on Monday Night Raw for 30 days.

The suspension stems from an angle that opened on this week’s show. Raw General Manager Kurt Angle was in the ring to introduce the new Raw Women’s Champion, Alexa Bliss. After some bragging, Rousey arrived at the ring, not too pleased. Bliss continued to brag, calling Rousey an overhyped rookie.

That caused Rousey to go on a tear, destroying Bliss, Angle and a number of other officials who tried to break up the altercation. The segment ended when Rousey put Bliss through a table that was set up in the ring for the celebration.

According to WWE.com, Rousey is barred from Monday Night Raw until Wednesday, July 18 — three days after Extreme Rules. Therefore, she would be able to appear on Raw again on Monday, July 23.

Despite her suspension from Monday Night Raw, Rousey will still appear at all house shows she is advertised for. WWE confirmed to Dave Meltzer of F4WOnline.com that she will be at this Sunday’s show in Anaheim, California, as well as shows on Friday, July 6 in Philadelphia, Pennsylvania, Saturday, July 7 at Madison Square Garden in New York City, New York, and Sunday, July 8 in Bridgeport, Connecticut.

On television advertising in the Pittsburgh, Pennsylvania market that aired during Raw, Rousey is no longer being promoted for Extreme Rules at PPG Paints Arena. Previous advertising had Rousey’s Pittsburgh debut as one of the selling points locally for the show.

Rousey is currently advertised for Raw next week in San Diego, California, as well as Raw on July 9 in Boston, Massachusetts and Raw on July 16 in Buffalo, New York. Unless WWE does any angle where she goes against her suspension, her appearances will likely entail a dark segment after Raw goes off the air.