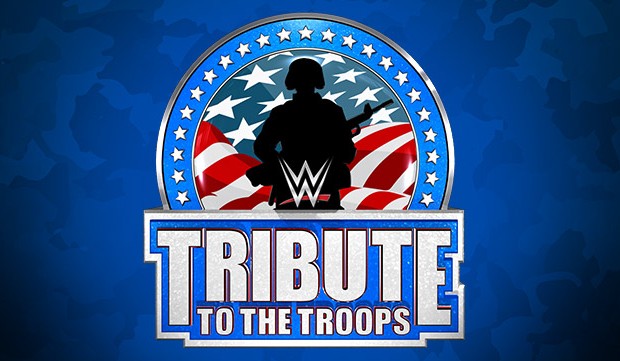 – WWE announced the following today on the 2015 Tribute to the Troops:

WWE Tribute to the Troops comes to Jacksonville

WWE announced that the 13th annual WWE Tribute to the Troops event will be held on Tuesday, Dec. 8, at Florida’s Jacksonville Veterans Memorial Arena for military personnel and their families stationed at the Jacksonville Naval Air Station, Naval Station Mayport and Kings Bay Naval Submarine Base. Tribute to the Troops will air on USA Network on Wednesday, Dec. 23, at 8 p.m. ET.

In the tradition of Bob Hope, WWE brings together the best of sports entertainment and pop culture with celebrity appearances and performances from music’s most popular acts for our servicemen and women, to honor their commitment and dedication to our country. Tribute to the Troops has become a holiday tradition and is considered TV’s most patriotic and heartwarming show of the year.

While in Jacksonville, WWE Superstars and Divas will spend time giving back to those who serve and their families with Be a STAR anti-bullying rallies, hospital visits and military outreach at the Jacksonville Naval Air Station, Naval Station Mayport and Kings Bay Naval Submarine Base.

Florida Governor Rick Scott said, “We can never thank our veterans and military members enough for their brave service to our nation. It is important to frequently honor our American heroes for the sacrifices they have made to keep our families safe. Florida remains the most military friendly state in the nation and we are proud to host this year’s Tribute to the Troops celebration.”

“WWE has gone above and beyond the call of duty in supporting the men and women of the U.S. Navy,” said Rear Adm. Mary Jackson, Commander, Navy Region Southeast. “We are very fortunate to have the upcoming Tribute to the Troops right here in Jacksonville, home to more than 22,000 Sailors and their families. I am hearing lots of excitement and energy about this event! This is also a special time for us to say thank you to WWE!”

“It is a privilege for WWE to entertain our military as a way to thank them for their commitment and sacrifice for our country,” said WWE Chairman & CEO, Vince McMahon. “Everyone at WWE looks forward to this annual celebration, and we are proud to partner with the U.S. Navy and Governor Rick Scott to put smiles on the faces of the servicemen and women and their families.”