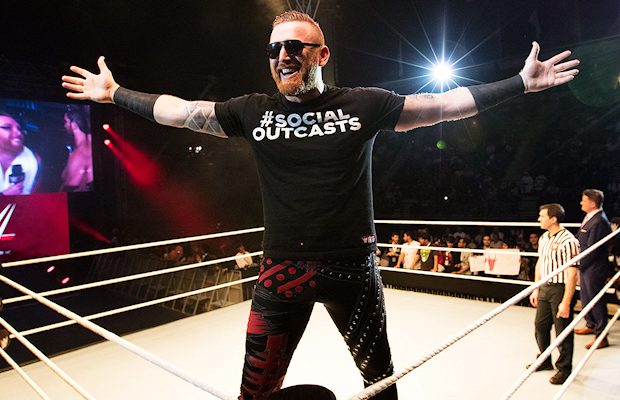 – Below are the top 10 moments from last night’s WWE SmackDown and Draft:

– As noted, the Draft ended with just 59 picks after 60 were advertised and Heath Slater was not drafted to RAW or SmackDown. WWE posted the following on Slater and noted that there are rumors of him working for EVOLVE or in the UK:

Rocker? Actor? Indies? All avenues are open for the Social Outcast.

After Tuesday night’s SmackDown Live, the WWE Universe watched helplessly as the lights quite literally went out on Heath Slater.

The Social Outcast member more than lived up to his former group’s moniker when he found himself sitting alone in the dark, the only Superstar not chosen during the WWE Draft. And though the awkward moment proved painful to watch and may have brought lesser men to their knees, the rejection seems only to have added fuel to the redheaded rocker’s fire.

“Guess who is the Hottest Free Agent… Yeah!!!! Me!!!” Slater tweeted, moments after SmackDown Live went off the air. And though his assessment may be overly optimistic – or arguably delusional – perhaps he has a point. After all, Slater is also a Slammy Award winner, a three-time WWE Tag Team Champion and the man who has defeated the likes of Seth Rollins, The Great Khali and Dolph Ziggler.

Any independent promotion with an ear to the ground knows Slater would be a respectable acquisition. Rumors have even surfaced that sports-entertainment’s newest free agent has already been in talks with EVOLVE Wrestling’s Gabe Sapolsky and has reached out to William Regal regarding promotions in the United Kingdom.

If Slater does decide to hang up his boots, however, it may well be time for his close-up. With a role in the upcoming film The Marine 5: Battleground and as host of WWE Game Night on WWE.com, the burgeoning actor appears to have caught the bug. If so, Slater finds himself uniquely poised to follow The Rock and John Cena as the newest WWE Superstar to conquer Hollywood.

And for those who have clamored to hear him fulfill his destiny as a front-man in a rock-n-roll outfit, don’t unplug your headphones just yet. With time now on his side, The One Man (Southern) Rock Band may soon be spending days laying down tracks in an effort to rock your face off before long.

Regardless of what path his journey may take, whether in the ring, on a movie set or in a recording studio, Heath Slater isn’t about to rest on his questionable laurels. To paraphrase rocker Neil Young, it’s better to burn out than to fade away … bay-bay!