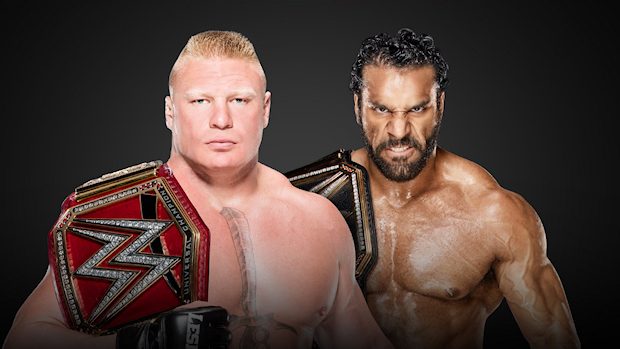 The World Champions of Raw and SmackDown LIVE will collide at Survivor Series when Universal Champion Brock Lesnar clashes with WWE Champion Jinder Mahal in a Champion vs. Champion Match. To add intrigue to the match, this match could feature a Special Guest Referee.

Dave Meltzer reported Wednesday night in the Wrestling Observer Newsletter that three candidates are being talked about for the role, including John Cena. He’s currently off WWE television filming “Bumblebee,” a spinoff to the popular “Transformers” films.

The first conclusion is that it could lead to Cena challenging Mahal, a match Mahal himself has been pushing for WrestleMania 34. However, while Cena is a candidate for the spot, Vince McMahon is also considering Dwayne “The Rock” Johnson and “Stone Cold” Steve Austin. In both cases, the issue would be if they want to do it, and with Johnson, whether his schedule will allow him to do it and how much it would cost.

Johnson and Lesnar have wrestled in the past, but that was 15 years ago (at SummerSlam 2002). Austin and Lesnar never wrestled, as Austin walked out of WWE the night they were scheduled to have their first match (in June 2002). In both cases, it’s doubtful either match will ever happen. Johnson vs. Lesnar was Vince McMahon’s ideal main event for WrestleMania 30 in 2014 in New Orleans, but Johnson suffered series of muscle tears in his 2013 Mania match with Cena, which led to a delay in filming “Hercules.” Movie studios have frowned on Johnson wrestling since and he’s never done a serious match since. Austin is done as a wrestler, and hasn’t wrestled in more than 14 years,

The Toyota Center in Houston will host the 30th anniversary of Survivor Series on Sunday, Nov.19, 2017.