WWE's Plans For Brock Lesnar and The Universal Championship At The Royal Rumble - PWPIX.net 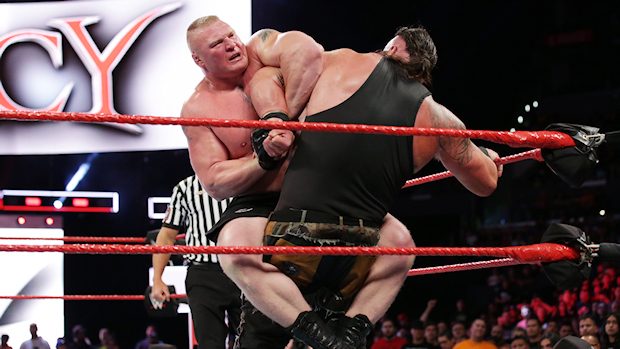 When the dust settled following last night’s Raw main event pitting Braun Strowman against Kane, Brock Lesnar still didn’t have a Universal Championship challenger for the 2018 Royal Rumble event in January. The match ended in a Double Count-out and the two continued brawling.

Following the match, Charly Caruso tried to get a few words with “The Monster Among Men” backstage. Strowman would only say that nothing will stand in his way from Lesnar and the Universal Championship.

We now know where this storyline is going as Dave Meltzer said last night on Wrestling Observer Radio that a Triple Threat Match between Lesnar, Strowman, and Kane for the Universal Championship is currently planned for the Royal Rumble on January 28, 2018, at the Wells Fargo Center in Philadelphia, Pennsylvania.

Several ideas were pitched for Lesnar’s Universal Championship Match at the Royal Rumble and Vince McMahon decided on holding a Triple Threat Match. Meltzer, however, noted that it’s possible that McMahon changes his mind again.

It was announced last night that Lesnar and Paul Heyman will return to Raw next week, which takes place in Providence, Rhode Island.

NEXT WEEK: #UniversalChampion @BrockLesnar RETURNS to #RAW with @HeymanHustle, as we are about to learn who his challenger will be at @WWE #RoyalRumble! pic.twitter.com/jcCchh6eoC