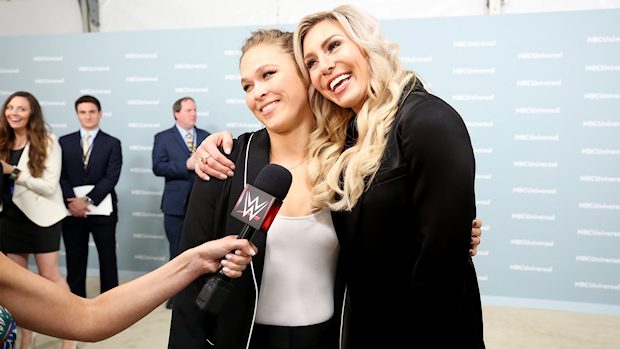 Ever since WrestleMania 34, there have been rumors of a women’s match headlining WrestleMania 35, which takes place on April 7, 2018, at MetLife Stadium in East Rutherford, New Jersey — six years to the day of WrestleMania 29. The most likely match-up seems to be Ronda Rousey vs. Charlotte Flair with a title at stake.

Dave Meltzer reported two months ago in the Wrestling Observer Newsletter that while this idea is on the drawing board, it is one of many ideas WWE is considering for the top women’s match.

In an update on the situation, WWE insider Brad Shepard says WrestleMania 35 will be headlined by women should Dwayne “The Rock” Johnson decline to wrestle at the show. The top three ideas, which all involve Charlotte Flair, are as follows:

* A Triple Threat Match between Rousey, Lynch, and Flair

A source in #WWE on the main event of Wrestlemania 35: “Aside from Rock formally agreeing to do a match, your main event is Ronda vs. Charlotte or a mix of Becky/Charlotte (or both in a triple threat).”

During a radio interview just before SummerSlam, Flair talked about facing Rousey.

“I want to face her,” Flair said. “When I think of WrestleMania and headlining, I think of the biggest stories, the biggest stars. I just know to be in the main event picture, it would take the right storyline.”