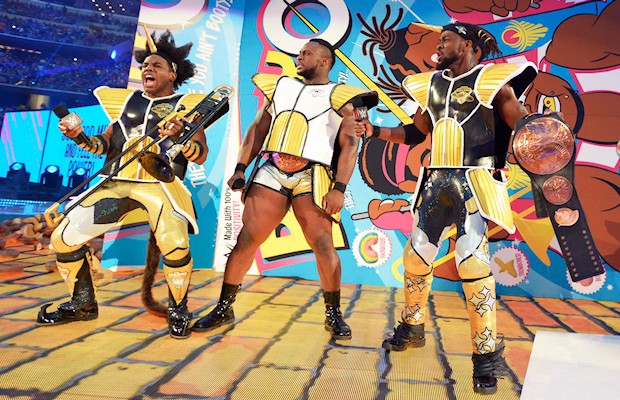 – WWE Tag Team Champion Xavier Woods just spoke with IGN to talk about The New Day’s Dragon Ball Z inspired gear at WrestleMania 32, his love for anime and more. The full interview is at this link. Below are highlights:

Whose idea the gear was:

That was my idea. I don’t have have a problem taking credit for that one! But Kofi does like Dragon Ball Z. [Big] E wasn’t really an anime guy…he’s more of a old-school hip-hop head. But we showed him a picture of the stuff that what we wanted to wear, and he was all in. And it’s nice because there are people that caught the attention to detail. So like, their suits didn’t have tails and mine did. So you could tell that if there was a full moon, then we wouldn’t have had a problem winning the match. Or if I turned into a great ape it would have been all good. Essentially, mixing my love for cosplay into my love of wrestling and have it not be outlandish…it’s cool that people appreciate it.

Vince McMahon’s reaction to their look:

Oh, we didn’t see him until right before we went out. It’s funny, because we’ll always have some kind of harebrained idea, and then he sees it right before we go through the curtain, and just kind of gives a little grin and thumbs up.

If they have to ask for permission to dress up like that:

It’s to a point now where we kind of have a little bit more trust than we did when we started. And they know we’re not going to go out there and do something that’s going to mess up a sponsorship or anything like that. Things we do are going to do are going to be in-bounds for our PG parameters. Still be fine for kids, but then have something that’s a little bit for adults. We liken it to Shrek: we’re in PG parameters but there’s jokes in there for adults if you’re paying attention. But they’ve kind of given us leeway in the sense that we have gone out there and are just having a good time and getting people–luckily–into what we’re doing, because you know it’s always hit or miss with the entertainment industry. But we’ve been lucky enough to kind of hit a pretty good stride right now, and so the company’s been pretty good to us for that.