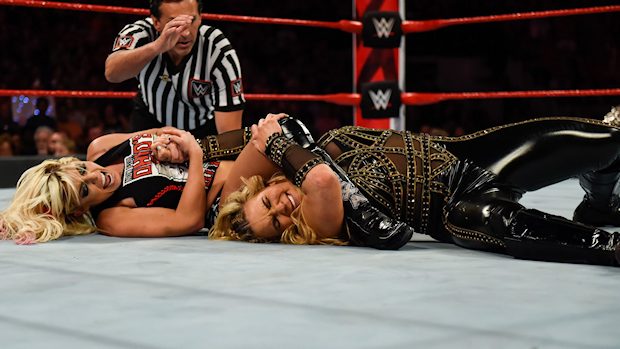 – In the same city that hosted her WWE in-ring debut at WrestleMania 34, Raw Women’s Champion Ronda Rousey stands alongside her friend and training partner Natalya to battle Alexa Bliss and Mickie James in tag team action on Raw.

Bliss was originally scheduled to team with Alicia Fox against Rousey and Natalya. In this backstage interview with Mike Rome, Bliss explains why she’s teaming with James instead of Fox.

EXCLUSIVE: @AlexaBliss_WWE reveals why @MickieJames will team up with her tonight in a Tag Team Match against @RondaRousey & @NatbyNature on #Raw… pic.twitter.com/qiCVetAIwb

What a plessure to meet you @Jarrius – two @WWE Hall of Famers hanging out backstage at #RAW https://t.co/k8Lf8Iwmn6

Robertson received the Warrior Award at the 2018 WWE Hall of Fame Induction Ceremony.

– Before Raw went on the air from the Smoothie King Center in New Orleans, Louisiana, the following two matches were taped for the September 13 episode of WWE Main Event: