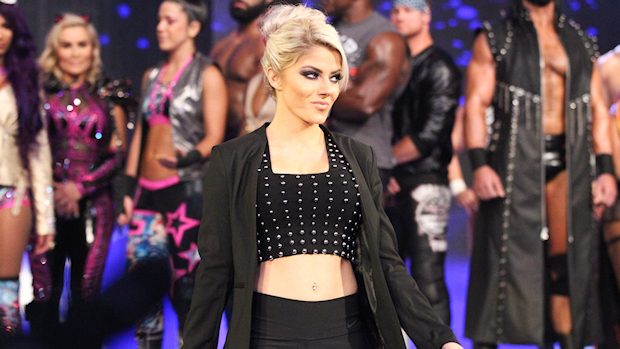 Alexa Bliss is still not cleared to wrestle after suffering a concussion last month and we saw this play out on Raw last week with Acting Raw General Manager Baron Corbin naming her the captain of the Raw Women’s Survivor Series team. In an in-ring promo, Alexa declared her intention to be a purely managerial captain instead of a competitor in the match herself.

Dave Meltzer provided more details on Alexa’s injury status on Wrestling Observer Radio on Saturday night and it doesn’t sound good. Alexa actually suffered multiple concussions within a short period of time and WWE is now being extra cautious with her.

“There’s been a lot of talk about what has been going on with her,” Meltzer said. “It was not just a concussion. She’s actually had multiple concussions in a short period of time. That’s why they’re so cautious about her right now. I don’t know the number but I was told it was multiple concussions. That’s not a good thing.”

After the story broke, Alexa took to Twitter to downplay rumors that her wrestling career could be over.

“There is concern about her physically,” Mike Johnson said on PWInsider.com’s audio show (h/t WrestlingNews.co).

“She’s had a number of concussions. They feel that there’s been too many in too short a time so she’s not gonna be back in the ring anytime soon. They’re not gonna put her back in the ring until they feel she should be medically cleared. If that means two weeks, two years, six months, I don’t know but I am told that pretty much they are going to find things for her to do to include her in the mix without having to take any physical punishment because they want her to be careful and they want to be cautious with her.”

Johnson mentioned the retirement rumors going around. He made it clear that the retirement stories have not been confirmed to him but the belief among people in WWE is that she’s not returning to the ring anytime soon.

“The story is that she’s been sat out for good. I haven’t confirmed that yet speaking to anybody but there is certainly at least legitimate concern with the idea she is not gonna be back anytime soon in a physical role,” Johnson said.

“That can change with one medical appointment but as we saw Bryan Danielson in the past, it could be an extended period of time that she is out. We’ll wait and see. There is no definitive one way or the other on this.”

Bliss has been out of action since suffering a concussion on October 20 during a tag team match against Rousey and Nia Jax in Hartford, Connecticut. Her injury came one night after she returned to the ring after being out of action for a month. She was forced to miss her scheduled match at WWE Evolution on October 28, where she was set to team with Mickie James against Trish Stratus and Lita. Alicia Fox took her place, although Bliss accompanied her and James to ringside.

Despite being injured, Alexa worked WWE’s entire tour of Europe in a mostly non-physical role supporting heels at ringside. However, last Sunday in Barcelona, Spain, Bliss technically returned to action by teaming with The Riott Squad against Banks, Bayley, Jax, and Brooke. She dragged Sarah Logan out of the ring to save her from a submission from Banks midway through the match and then ran away from Jax in the build-up to the finish, which saw Jax hit a Samoan Drop on Logan for the win.

While Alexa can still appear at WWE live events while injured and apparently even get a little physical, she just can’t take any bumps. The WWE creative team wants to keep her on television while injured since the women storylines on Raw not involving Ronda Rousey are centered around her. They’re trying to come with ways to keep her on TV and one thought was to make her an authority figure, possibly even take over Baron Corbin’s role as Acting Raw General Manager.

WWE’s initial plans for the Raw Women’s Survivor Series team were for Alexa to be the captain but as a wrestler instead of a manager. There is no word on when she will be back in action but Sunday at Survivor Series seems unlikely now. Concussions are unpredictable in the sense that it can keep someone out of action for days, weeks, months or even permanently. Concussions have led to multiple WWE Performance Center trainees leaving WWE and quitting wrestling altogether.