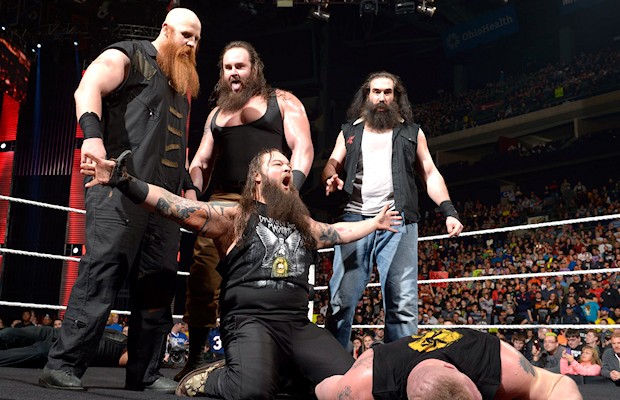 On Raw, Chris Jericho invited longtime rivals Roman Reigns and Brock Lesnar to “The Highlight Reel,” which quickly becomes a chaotic preview of what to expect in the 2016 Royal Rumble Match.

After Reigns and Lesnar started brawling and The League of Nations ambushed them both during the closing segment, The Wyatt Family stepped out of the darkness with its fangs bared. The clan first encircled and attacked Reigns. Luke Harper finished him off with a discus clothesline.

Wyatt then had his men turn their focus to Lesnar.

Harper, Wyatt, Erick Rowan and Braun Strowman all took turns hammering the powerhouse. Lesnar struggled to stand — his legs wobbly, his eyes glazed. Wyatt then spiked his head into the mat with a Sister Abigail.

So where is this angle headed?

Behind the scenes, there has been talk of Lesnar facing either Wyatt or Strowman at Wrestlemania 32.