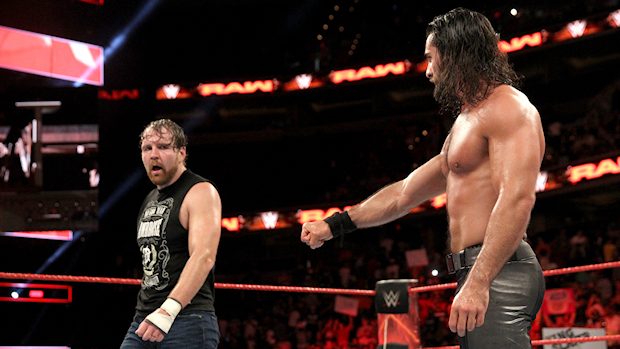 Following a victory over The Miz and his Miztourage in a 3-on-2 Handicap Match main event on Raw, Seth Rollins extended his fist to his former Shield brother. Ambrose, however, was reluctant to partake in the traditional Shield fist bump, much to Seth’s disappointment.

According to the Dirty Sheets podcast, this angle will lead to Ambrose and Rollins challenging Cesaro and Sheamus for the Raw Tag Team Championship at SummerSlam.

Ambrose and Rollins were both formerly in The Shield, however, the pair fell out when Rollins turned heel on his fellow Shield members to join Triple H and Stephanie McMahon in The Authority.

In recent weeks, the pair has been reluctantly reunited against The Miz and his Miztourage, however, whilst Rollins seems to fully committed to teaming with Ambrose, Ambrose remains hesitant to trust Rollins, given his prior turn.

Original creative plans called for Sheamus and Cesaro to defend the Raw Tag Team Championship in a multi-man tag team match, whilst Rollins and Ambrose were poised for a Triple Threat Match against Intercontinental Champion The Miz.

Creative has decided to stick with The Shield reunion storyline, which will culminate with Ambrose finally accepting the traditional Shield fist bump — most likely after winning the Raw Tag Team Championship at SummerSlam.