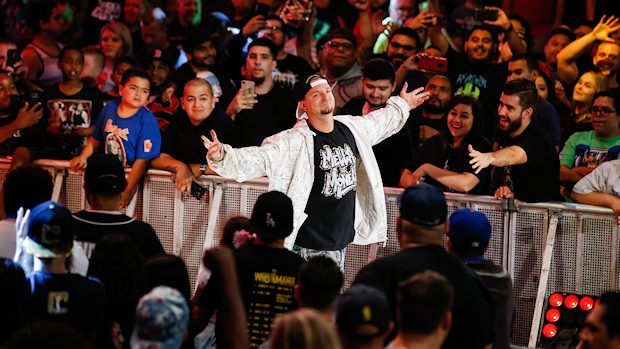 – James Ellsworth’s future in WWE seems uncertain after Asuka annihilated the man himself to the tune of kicks, strikes and a smothering Asuka Lock following her loss to Carmella at Extreme Rules. Then two days later on SmackDown LIVE, General Manager Paige asked Carmella how “her boyfriend” is doing. Carmella appeared disgusted, saying “eww” and that he’s not her boyfriend.

This would seem to indicate that his character got written off storylines, but maybe not. His profile on WWE.com was added to the SmackDown LIVE roster this week.

According to Dave Meltzer on Wrestling Observer Radio, Ellsworth is not under contract to WWE. Furthermore, he is still booked for various independent promotions.

Following Extreme Rules, Ellsworth made note of the show taking place in Pittsburgh, Pennsylvania, which is where he made his WWE debut against Braun Strowman on Raw on July 25, 2016.

– After being away since March, NXT General Manager William Regal returned at Wednesday’s NXT television tapings at Full Sail Live in Winter Park, Florida. His return should air on August 15, which is the final episode before TakeOver: Brooklyn 4 on August 18.

According to the Wrestling Observer’s Dave Meltzer, Regal has been dealing with a medical condition dating back to a few weeks before WrestleMania 34. Despite his absence, WWE continued to portray Regal as if he was making decisions on NXT. NXT Superstars would be shown waiting to see him in front of his office and entering it like he’s there and talking about decisions he made.

– Following his victory over former WWE Cruiserweight Champion Akira Tozawa on this week’s episode of 205 Live, Lio Rush explains to Dasha Fuentes why he is “The Man of the Hour.”