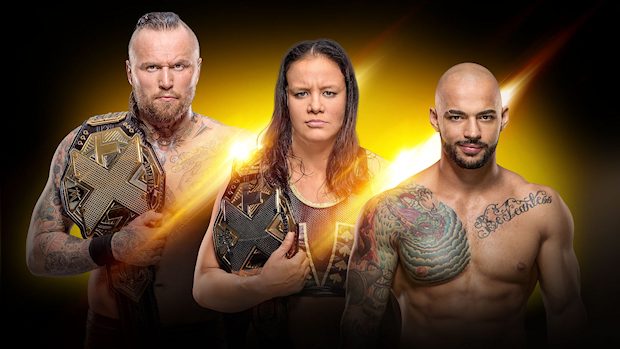 Thanks to Tara for texting us the following WWE NXT TV spoilers from tonight’s tapings at Full Sail University in Winter Park, FL:

* NXT North American Champion Adam Cole defeated Sean Maluta. After the match, Cole cuts a promo but is interrupted by Ricochet. Ricochet wants a title shot at “Takeover: Brooklyn IV” but Cole turns him down. They have words until NXT Tag Team Champions Roderick Strong & Kyle O’Reilly come out to intimidate Ricochet. The War Raiders are out next to even the odds. The Undisputed Era tries to retreat but they’re attacked by Trent Seven and Tyler Bate

* EC3 defeated Kona Reeves. The Velveteen Dream came out with a mic during the match to try and distract EC3 but it didn’t work

* NXT Women’s Champion Shayna Baszler defeated Candice LeRae in a non-title match. After the match, Baszler attacked Candice but Kairi Sane made the save. Baszler hit Sane with a cheap shot and then left

* Tommaso Ciampa defeated Aleister Black to win the NXT Title. This match should air on the last NXT episode of June. The finish saw the referee take a bump before Johnny Gargano ran out. Gargano attacked Ciampa and Black but Ciampa recovered first and pinned Black for the title

* Ricochet is headed to the ring when The Undisputed Era attacks him on the stage. NXT North American Champion Adam Cole says he’s not a coward and then accepts the challenge for “Takeover: Brooklyn IV”

* The Street Profits defeated The Mighty

* New NXT Champion Tommaso Ciampa comes to the ring and says NXT now belongs to him. He gets major heel heat for ripping on an older lady in the front row and taking shots at Johnny Gargano. Aleister Black comes out to attack but Gargano runs out past Black and nails Ciampa first. Gargano cuts a quick promo on Ciampa and he retreats with the title. Gargano takes the blame for Ciampa being champion and Black says the same thing. Black drops Gargano out of nowhere with a Black Mass kick. Gargano got some boos at one point and then “you deserve it” chants after the kick

* The Velveteen Dream comes out and cuts a promo on EC3. EC3 comes out to confront Dream and ends the segment by hitting him with the One Percenter

* Johnny Gargano vs. Aleister Black is next for the main event. NXT Champion Tommaso Ciampa interferes and attacks both of them for the no contest. NXT General Manager William Regal returns and announces a Triple Threat for “Takeover: Brooklyn IV” – Gargano vs. Black vs. Ciampa with the title on the line