Backstage Update On WrestleMania Plans For Kevin Owens and Sami Zayn, No Title Match For The Bar? - PWPIX.net

Backstage Update On WrestleMania Plans For Kevin Owens and Sami Zayn, No Title Match For The Bar? 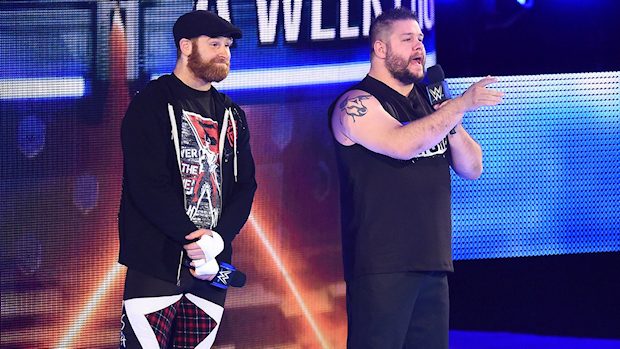 This week on SmackDown LIVE, Sami Zayn stunned Kevin Owens with a Helluva Kick to win the Fatal-5 Way Match. While the match was done as a tune-up for this Sunday’s WWE Title Six-Pack Challenge Match at WWE Fastlane, the result has led to speculation that the two will face in a one-on-one match at WrestleMania 34.

According to Dave Meltzer in the Wrestling Observer Newsletter published today, WWE creative doesn’t have any big plans for Owens and Zayn at WrestleMania. As of now, the current plan is for both Superstars to compete in the Andre the Giant Memorial Battle Royal.

Meanwhile, it was reported earlier this week by PWInsider.com that the word backstage at Raw is that WWE plans on having Cesaro and Sheamus defend the Raw Tag Team Championship against a tandem that is “not currently a team” at Wrestlemania. Meltzer, however, reports that The Bar are currently not scheduled to wrestle, but expected to be a part of the show in some sort of angle.