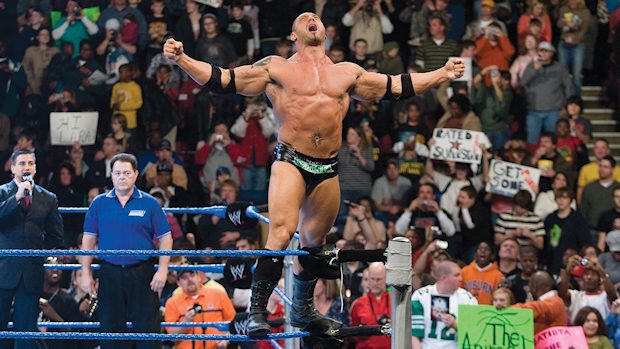 It’s been more than three years since Batista last showed his face in WWE television, but that doesn’t mean he isn’t thinking of coming back.

Speaking to legendary WWE commentator Jim Ross on The Ross Report podcast last month, Batista revealed that he had spoken to WWE Chairman Vince McMahon about returning to wrestle.

“I’ve talked to Vince recently and he knows what I want. I’ve made it very clear that I wanted to go back and run a program with Hunter [Triple H]. I’ve been very public about it and I think that’s the thing that would get me back,” Batista said.

A feud with Triple H is something Batista has wanted after the two engaged in a successful rivalry which culminated in the main event of Wrestlemania 21 in 2005.

Batista returned to WWE in 2014 after a four-year absence and won the Royal Rumble Match before wrestling Daniel Bryan and Randy Orton in the main event of Wrestlemania 30. Despite some issues with fans during his return, and some outspoken outbursts regarding the wrestling business, the passion still burns in Bautista.

He said, “I’ve never burnt that bridge because I still love wrestling and everybody in the WWE has been really good to me. I have my gripes with the company, which I’m sure everybody does, but at the same time, I don’t ever disrespect the company intentionally. I don’t really have any reason to. I didn’t leave there under bad circumstances, I left just because I wanted to pursue other things. I didn’t walk out on them, I let my contract run out.

“They knew I was going to be leaving. I did business the right way. I’m really thankful that I did. The short answer to that is yes, I would love to go back, but the reason I have not gone back is because I don’t want to do a one-off. I want to go and I want to wrestle.

“I want to do some house shows, I want to be a part of the program and I love it. The one-off thing, the cheap pop thing, it doesn’t do anything for me.”

Batista’s dedication to wrestling has never been in doubt, and he spoke in May about his desire to wrestle purely for fans in arenas, rather than on television. He seemed more interested in a full-time return in his interview with Ross but said that it would need to be impactful, rather than nostalgic.

He said, “It’s a matter of scheduling if I can go back and if I happen to get injured is it going to affect something else?

“It took me a few months the last time I went back, it took me three months to really get in a groove and get people to react the way I thought they were going to react.”

You can listen to Batista’s remarks below. For the full interview, click here

In a behind-the-scenes update on the situation, Dave Meltzer reports in the latest issue of the Wrestling Observer Newsletter that Batista is very interested in returning for a lengthy final run.

“Dave Bautista, who turns 49 next month, is very serious about going back for a relatively lengthy (six months to a year) final full-time run,” Meltzer wrote.

“He doesn’t need to do it but it appears it’s something he wants to do. He’s doing well in Hollywood but the problem is if you sign with WWE, they own your contract and if something comes along, the company wanting him will have to negotiate with WWE, which makes the deal more difficult.

“As far as doing a thing like Goldberg or Lesnar where he works a few dates as a big attraction, that makes all the sense in the world, but he’s talking a more regular schedule.”

Since leaving WWE in 2014, Batista has enjoyed a successful acting run that included him having a starring role in Marvel Studios’ hit “Guardians of the Galaxy” series.