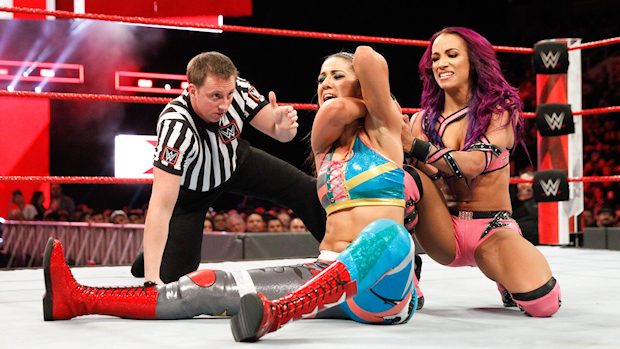 During an interview with the Sky Sports Lock Up podcast, Bayley discussed her feud with Sasha Banks and where she would like to have the blow-off match. Highlights from the interview are as follows:

The slow build nature of her feud with Sasha:

“When I was a kid watching wrestling that’s kind of how it was. You had these long feuds and storylines and you just got more and more interested and you wanted to see where it was going to go. You wanted to see the big blow-off match and I like that stuff because that’s what I grew up watching.”

Having a slow feud as opposed to rushing through it:

“There are so many people on the roster, there’s so much going on and there’s so much content that we sometimes rush through things so maybe that’s what we get used to and what we’re expecting. I’m pretty happy with it. I’m a fan still but I’m not a viewer so perhaps I see it differently but I really enjoy what’s going on. It’s fun and I think it’s going well.”

The thought of facing Sasha this August at SummerSlam at the Barclays Center in Brooklyn, New York:

“That would be incredible. Any time I get to wrestle Sasha, I always want to do it. For SummerSlam to be in that building, I don’t know if I would be able to hold my tears back, but I’d love to do it. That’s a goal. Hopefully, we can do it.”

Bayley also discussed the current WWE UK tour, Paige’s retirement, a potential Four Horsewomen vs. Four Horsewomen match and the importance of having mushy peas with fish and chips. You can check out the interview here.