Home / Wrestling News / Diva News / Bayley on Her Persona Clicking with Fans, How She Felt After Winning the WWE NXT Women’s Title, More

Bayley on Her Persona Clicking with Fans, How She Felt After Winning the WWE NXT Women’s Title, More 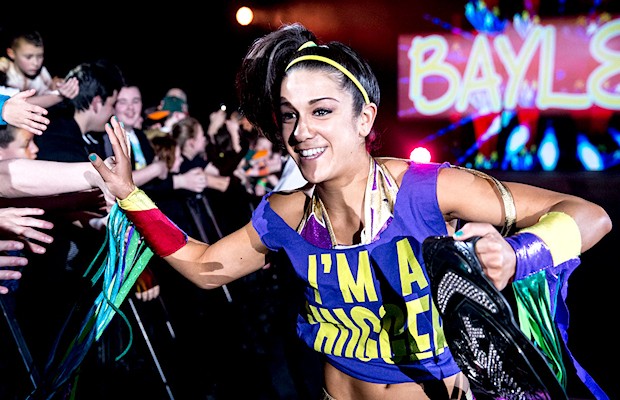 – Brian Fritz of SportingNews.com recently spoke with WWE NXT Women’s Champion Bayley to promote NXT “Takeover: Dallas” and WrestleMania 32. The full interview is at this link. Below are highlights:

SN: Last year was a huge one for you becoming the NXT Women’s Champion and the outstanding matches you had with Sasha and others. Do you think you can have a more satisfying year than that?

BAYLEY: I hope so. I expect to. Maybe not this year, maybe not next year but I want to do this for a very long time. I want to work with WWE forever and I hope that I can have another successful year, maybe just as successful or a little bit more. I always want to push myself to be better that I was. It’s going to be hard because last year was special and a very important year in my career. Very pivotal but I just want to be better.

SN: After you won the Women’s Championship, do you feel any different? Did you think you had to assume a different role, a leadership role, in NXT?

BAYLEY: Yeah definitely. I’ve always tried to be a leader. As the girls were going up to WWE (Sasha Banks, Charlotte and Becky Lynch), I’ve moved closer to being the actual leader and being the longest (tenured) diva in the locker room so I always knew that this time was going to come. Once I became the champion, I knew that I was going to have girls looking up to me as far as in the locker room. I had to led by example and I always had to be the first person there, the last person to leave, the hardest worker in the room and be able to help wherever it’s needed, everything.

SN: When did you realize you had something with the Bayley persona we see now where it clicked with you and with the audience?

BAYLEY: I guess it was in a promo class. I was really bad at promos. I wasn’t used to doing them and I cut generic wrestling promos all the time. One day Dusty Rhodes had me cut a promo about Summer Rae and I was just a huge fan of hers and it just came off really natural because that’s who I really am. I’m just a huge fan of WWE so it became this super fan thing and it was so easy and natural and I loved it. It kind of clicked with everybody, they loved it, and once it got on TV I didn’t know if it would work or not but I think everybody was able to relate with me and far as the fans. We’re all just fans. That’s why we’re here.