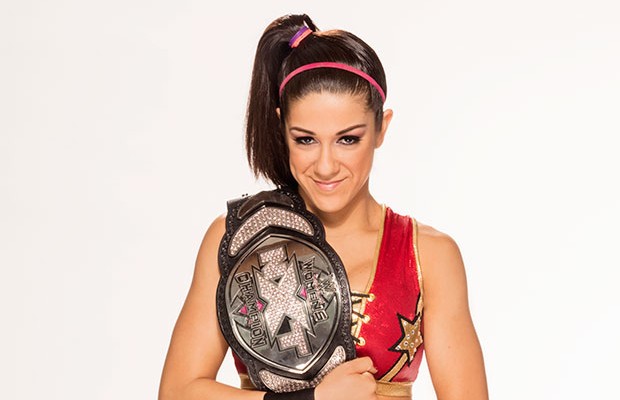 – WWE NXT Women’s Champion Bayley recently spoke with Mike Mooneyham of The Charleston Post & Courier. The full article also features quotes from Stephanie McMahon and WWE Divas Champion Charlotte, and can be found at this link. Below are highlights:

Joining Charlotte, Sasha Banks and Becky Lynch on the main roster and when that might be:

“That’s the plan. When we first got together and everything started rolling and we had all these great matches, we said that one day we’d change WWE and we’d change the world. They’re already doing it (in WWE) and have been for eight months. The Triple Threat match at Wrestlemania is going to be incredible. It’s going to set the bar. I’m excited. It’s going to be a little easier for me when I get there because they’re setting the table.”

“Sometime this year would be cool, but I also said that last year. I’m not really in a rush with how good NXT is going. I’m at the top right now as NXT champion and we’re traveling the world. “I’m getting to be a part of NXT for their first time in many parts of the country. I’m happy that I’m here, but the ultimate dream is to be on the main roster. When that happens, I’ll be ready.”

“It really been amazing watching her grow. When I first got there, she hadn’t even had her first match with NXT. I remember having her first match on TV with her dad (Ric Flair) out there. She was out for about a month with a broken toe, but when she got back she was even better. Every time she’s in the ring she’s getting better and better. It’s been fun watching her grow. With everything’s she’s gone through, she just keeps going.”

“We’ve been privileged to have her. I always wanted to work with her. I got to have one match with her on the independents. To be able to train with her, with all her knowledge and with the group of girls that we have, is just amazing. She shows us cool things to try out, she teaches us about psychology. All the girls, including the ones at WWE, and the new girls all have the passion to keep learning and applying what they have learned. I’m very lucky to be in this position with the staff that we have.”