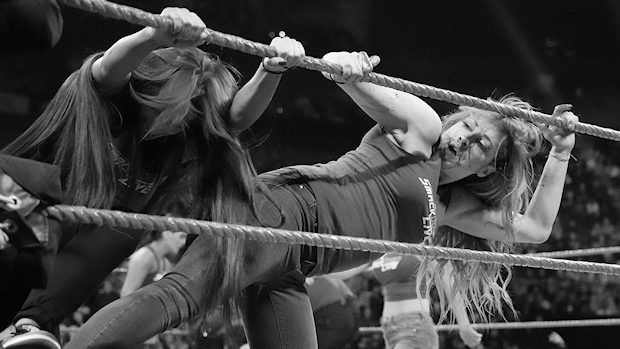 After finishing with Ronda, “The Irish Lass Kicker” came to the ring, where the rest of SmackDown LIVE’s Women’s division joined her in a total evisceration of Raw’s Women’s locker room, with Lynch leading the charge despite sustaining a bloodied nose.

Becky’s nose appeared to get bloodied moments after getting physical with Jax. Jax nailed Lynch with an elbow to the face, causing her to fall to the mat. When Lynch got back up, her face was covered in blood.

Lynch didn’t let that stop her, however, as she attacked Rousey with a chair after the Raw Women’s Champion ran to the ring for revenge. Becky then left the arena as the crowd went wild.

Friends become competitors as @SashaBanksWWE & @itsBayleyWWE battle for a spot on the #SurvivorSeries Team! #Raw pic.twitter.com/srSfzThgCm

Captain @AlexaBliss_WWE had EVERYONE fooled…because @RubyRiottWWE is the fifth member of the #RAW Women's team at #SurvivorSeries?! pic.twitter.com/bLpOpC6HjO

OH MY GOD! @BeckyLynchWWE has the #DisArmHer locked in on @RondaRousey in the backstage area! #RAW #SurvivorSeries pic.twitter.com/X2aJz3CgkY

There is ALL-OUT CHAOS on #RAW as @BeckyLynchWWE has brought the women of #SDLive to Kansas City! #SurvivorSeries pic.twitter.com/k0pHZTAM66

WHAT IS HAPPENING?! @BeckyLynchWWE has led an all-out INVASION of the #SDLive Women's roster onto #Raw!! pic.twitter.com/ESQNZFGXtg

Blood from a stone. I hope Becky beats Ronda this Sunday. Why even try to mess with this kind of momentum? #RAW #SurvivorSeries pic.twitter.com/SALIDAca4a

becky lynch, covered in blood after the run-in of the year pic.twitter.com/SBDa3X5KEE

Heel Becky Lynch while leaking a decent amount of blood is the best Becky Lynch. WWE has struck gold with Heel Becky Lynch but everyone loves her lol. #RAW #SDLive #BeckyLynch pic.twitter.com/VkzwJ8tukl