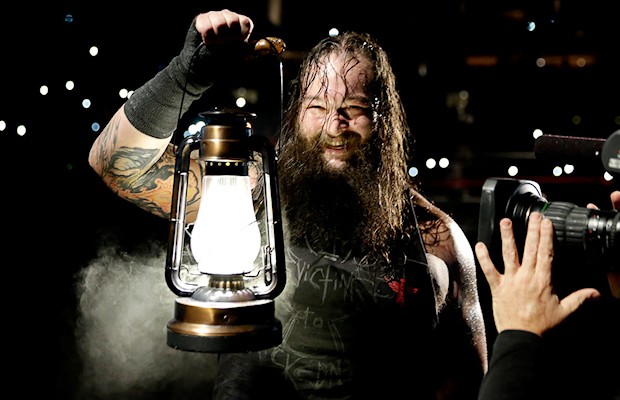 – As seen above, this week’s sitdown interview with Michael Cole features Bray Wyatt. Below are highlights:

* Wyatt welcomes Cole to his home and Cole asks about Randy Orton and if he was injured at the hands of The Wyatt Family. Bray says he has no sympathy for Orton because bad things happen to bad people everyday.

* Cole asks about Erick Rowan being back on RAW. Wyatt says Rowan was never a “former” member of The Family. Bray says Rowan has always been his brother, just like Luke Harper and Braun Strowman are. Wyatt says with Rowan back at his side, they are bigger and stronger than they have ever been.

* Cole brings up the question Wyatt did answer from Roman Reigns on RAW – if he’s scared of being alone. Wyatt thinks about it for a minute and gets in Cole’s face. He asks if Cole is scared to be alone or if he thinks Reigns is afraid to be alone. Wyatt knows Reigns better than he knows himself and there’s no way he’s 100% certain he will walk out of Hell In a Cell, so who is afraid?

* Wyatt says the story with he and Reigns is a sad one, the story of two broken-down gunslingers walking up opposite sides of the hill for the last time. Wyatt says they will find out how different they both are on Sunday. He knows what torment is because his head is a Cell that he’s been trapped in his entire life. Wyatt says his mind is more terrifying than anything in the world. He can’t fear the Cell because he’s already figured it out. Wyatt says the only way to survive the Devil’s Playground is to play God.