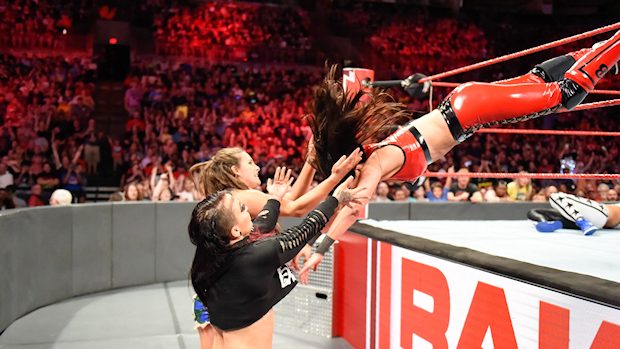 Last week on Raw, Nikki and Brie Bella knocked off The Riott Squad in the twins’ first televised match together in three years, and the two former Divas Champions were in rare form from the second the bell rang. With Nikki leading a coordinated attack on Sarah Logan’s shoulders and Brie raining “Yes!” kicks on her sternum, it took a ringside interference from Ruby Riott to give the Squad its first leg up of the match.

Brie found herself isolated by Logan and Liv Morgan, but a last-second tag brought a red-hot Nikki back into the fray. Ruby attempted to interfere again, but Brie took her and Logan out with a suicide dive, and Nikki sealed the deal with a Rack Attack 2.0 to Morgan.

Unfortunately, the twin duo’s return did not go off without a hitch as Brie botched her trademark suicide dive not once but twice.

Midway through the match, Brie attempted a suicide dive on Logan but hit the middle rope before falling to the floor. Logan tried to make the botch not seem so obvious by striking her with a forearm shot.

As the match concluded, Brie attempted a suicide dive on Logan and Riott, but since her opponents were out of place, she did a faceplant on the floor.

During an interview with Yahoo! Sports, Brie addressed the hiccup.

“With any type of physical body change, it changes so much. Even last week on Raw when I did the suicide dive and it was less momentum than I should have had, I forgot that I’m 10 pounds heavier than what I was. Gravity doesn’t lie. That was a little different for me,” Brie said.

“I don’t mind if I fail or if I succeed. No matter what, I want to look back with no regrets. If I fail, last week, for example, I went to sleep at night and I was kind of bummed out, but I learned something about myself. I learned where my body is at, where I am at.”