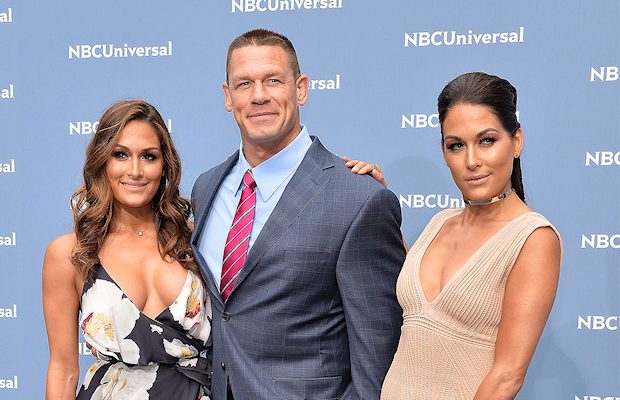 Brie Bella has shut down a report that claims she is furious with John Cena after he and Nikki Bella ended their relationship, saying she’ll always love him like a brother.

People.com reported this week that a source close to Brie told them that she “wants to kill” Cena due to the way he treated her sister:

“On one level, Brie wants to kill him, sure. No one should be allowed to hurt her sister like this. But honestly, on another level, there’s relief,” the source says. “Nikki was bending over backward to accommodate this guy and everyone, especially Brie, was worried that she was sacrificing way, way too much — most of all, motherhood.”

While Nikki publicly stated in the past that she was willing to give up being a mother for Cena, 40, those closest to the reality star knew she still struggled with the decision.

And after Brie gave birth to her first daughter Birdie in 2017, it became increasingly hard to watch her sister give up on her dream of starting a family.

“She will be such an amazing mom someday, and she loves Brie’s baby so much,” says the source. “So of course that’s what Brie wanted for Nikki. To have to hear her trying to convince herself and everyone else that she would be fine just giving it up, it was so hard. Brie never bought it.”

The Total Divas star took a screenshot of the article and posted it to Instagram Stories on Wednesday. She circled over the part that says “Brie wants to kill him” and wrote “false!!” She also wrote, “I’d never say this. I’ll always love @johncena like a brother. He’ll always be my family. My heart is hurting for he and my sister. #Truth.” 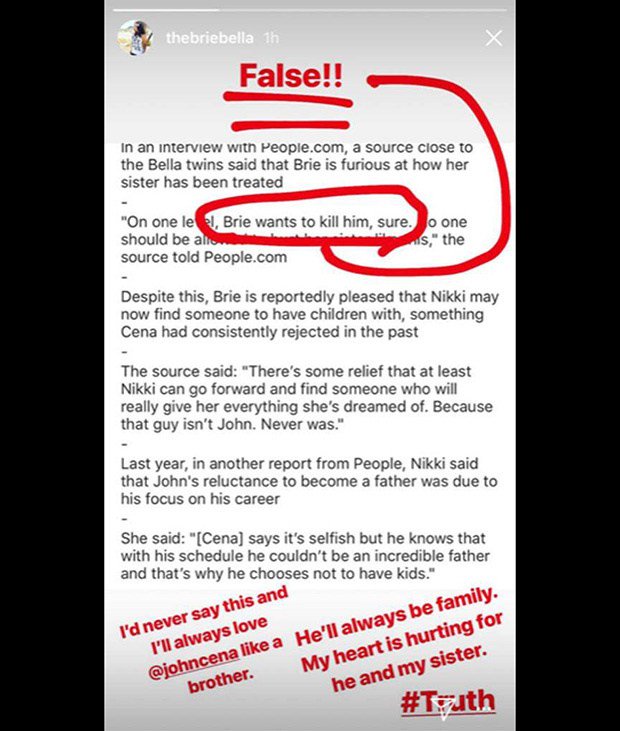 Cena and Nikki announced that they called off their engagement on Sunday, a year after he proposed during WrestleMania 33. The couple was scheduled to marry on May 5 during their planned destination wedding in Mexico.

The source tells People.com that Nikki’s family is optimistic that she will find someone who will be able to give her “everything she’s dreamed of.”

“There’s some relief that at least Nikki can go forward and find someone who will really give her everything she’s dreamed of,” the source says. “Because that guy isn’t John. Never was.”