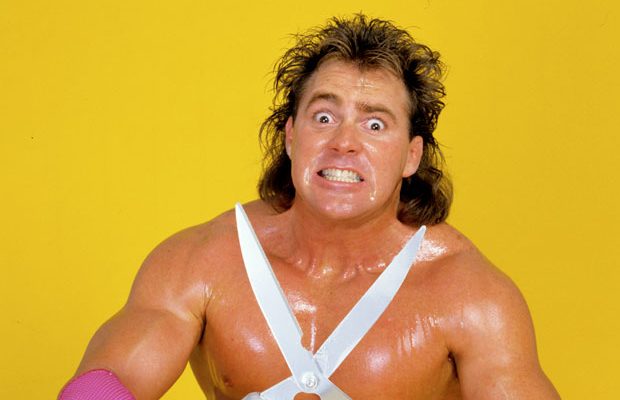 This extraordinary athlete debuted in 1984, managed by “Luscious” Johnny Valiant. This hated rulebreaker loved to strut and display his physical prowess in the ring while using a high-knee to put away opponents. As fans chanted “Fruitcake,” he formed the vaunted Dream Team with Greg “The Hammer” Valentine. The arrogant pair won the WWF World Tag Team Championship. when they defeated The U.S. Express. They held the titles until they were defeated by The British Bulldogs in a fast-paced thriller at WrestleMania 2. After the team disbanded at WrestleMania III, audiences were introduced to the World Wrestling Federation’s new barber, and “Adorable” Adrian Adonis was the first customer.

With exciting new ring music, ring attire, and steel shears, fans went wild as Brutus “The Barber” Beefcake took out opponents with his dreaded sleeper hold. Once they went to sleep, Brutus started struttin’ and cuttin’. An intense rivalry with The Honky Tonk Man led to an Intercontinental Championship Match at the inaugural SummerSlam. Sadly, Brutus never made the match as “Outlaw” Ron Bass attacked him days before the event.

He eventually returned and as The Mega Powers exploded, “The Barber” came to the aid of Hulk Hogan. The two longtime friends battled Randy “Macho Man” Savage and Zeus in the main event of the 1989 SummerSlam. In 1990. Brutus nearly lost his life in a parasailing accident. He received emergency surgery that lasted over seven hours. Eight titanium plates, 32 screws, 100 feet of steel wire, and a reconstructed skull later, the surgery’s success was a miracle of medicine. He was told he’d never walk again but after months of physical rehabilitation, he returned to the World Wrestling Federation and launched his talk show, The Barber Shop. When he was back at full strength, he formed The Mega-Maniacs with Hulk Hogan.

Today, Beefcake is the general manager at one of the largest gyms in New England and still makes select appearances on the independent circuit. Brutus’ life is one of courage, commitment and desire. This legend is one of WWE’s most beloved heroes and he has left his mark on the heads of opponents and in the hearts of fans.

When Did Brutus Beefcake and Chyna Date?

April 25, 2016 – Hulk Hogan joined millions of mourners last week in paying tribute to the memory of Chyna and took to Twitter to share his thoughts with fans.

After news of her death broke on Thursday, the wrestling legend wrote on Twitter, “Devastated over Chyna passing,she dated Brutus years before wrestling,such a beautiful soul and so kind to my children,rip Joanie love u.”

Hogan is referring to Chyna having gone out with Brutus “The Barber” Beefcake, which is an interesting tidbit that not too many people know about.

During a shoot interview with Kayfabe Commentaries in 2011, “The Ninth Wonder of the World” mentioned dating Beefcake when she was 18-years-old. This would have occurred in the late 1980s, when Beefcake was a top star in the World Wrestling Federation and she was attending the University of Tampa. Beefcake is a native of Tampa, Florida and was living there at the time.