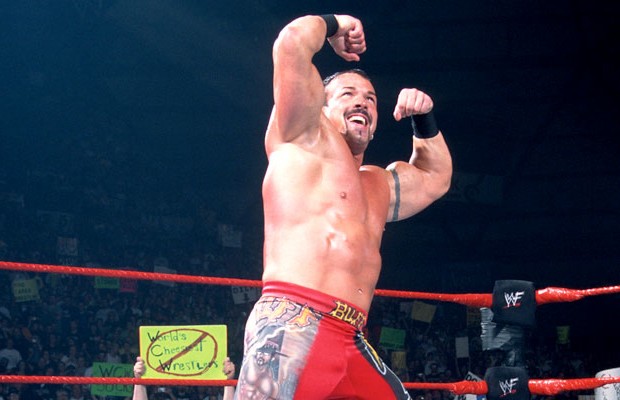 Buff Bagwell, who is best known for his appearances with World Championship Wrestling from 1991 to 2001, is planning on retiring from the squared circle.

The following press release was issued announcing his plans to retire next year after taking part in a farewell tour.

Woodstock, GA, May 31, 2018– Approaching his 28th year in the world of professional wrestling and sports entertainment, Marcus “BUFF the STUFF” Bagwell, or as many have referred to him over the years as his entrance music shouts “BUFF DADDY”!!! has made a definitive decision that as of May 2018 he will lace up his boots for the last time and put the block buster to rest.

When asking Buff about the retirement decision he simply said:

“When going with the Buff Daddy character I knew it was going to be a blessing and a curse.” The blessing was, it was always an over exaggerated part of me so it was easy and a lot of fun to do, but when you call yourself BUFF!! You better damn sure live it and be in that gym 4-5 times per week.

Going into my 28th year in ring performing and with injuries and a few major surgeries over these last few years I really wanted to end my in-ring career still looking and performing like Buff Bagwell.

Anchor Marcus Buff Bagwell is one of the most professional workers currently on the independent wrestling scene. His dedication to the professional wrestling world and the Buff Bagwell character goes unmatched by anyone currently working independent dates. This former 5 time WCW tag team champion and former NWO member is not only a very recognized draw to any promotion throughout the world, but goes above and beyond giving the fans and the promotion an experience to reflect on for many years to come.

For booking inquiries on Buff Bagwell, please contact MEP Worldwide Office at (330) 837.1697 or email at Tara@mepworldwide.com.