Carmella and Paige React To Negativity Toward "Diva" Moniker - PWPIX.net

Carmella and Paige React To Negativity Toward “Diva” Moniker 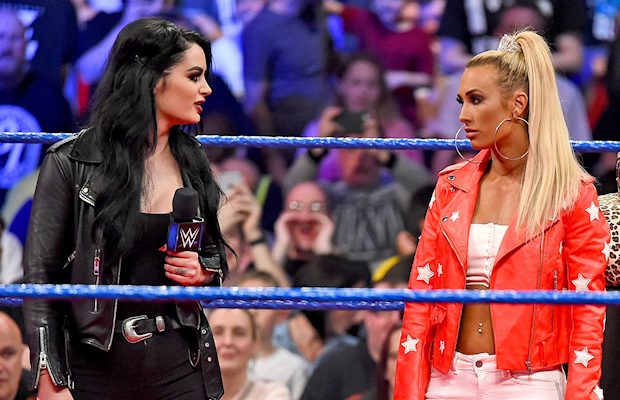 In 1999, WWE (then known as the World Wrestling Federation) introduced the term “Diva” to refer to the company’s female talent. The term was applied to women who appear as wrestlers, managers or valets, backstage interviewers, or ring announcers. The term was discontinued at WrestleMania 32 on April 3, 2016, when a new WWE Women’s Championship was introduced. WWE currently refers to their female talent as Women Superstars or simply just Superstars.

On Saturday, Carmella and Paige tweeted their thoughts on an opinion article labeled “How the Divas are damaging the Evolution.” The author, Steven Luke, says the wrestling ability of female talent from the “Divas Era” doesn’t compare to today’s Superstars. Luke feels bringing The Bella Twins, Trish Stratus, and Lita back for WWE’s Evolution pay-per-view event takes away the spotlight from “the current division that has changed the way people look at women’s wrestling.”

Carmella disagreed with the article, calling it “embarrassing.”

This is an embarrassing article. Every single woman from the past and current roster have made women’s wrestling what it is. EVERYONE is deserving. Enough of the negativity around the “diva” moniker. https://t.co/JAqI9OIVBa

Carmella said last month that today’s female Superstars wouldn’t be where they are today if it wasn’t for the Divas.

“It’s more that these women paved the way for us. If it wasn’t for the Divas, we wouldn’t be where we’re at right now,” Carmella said.

“There are obviously a lot of negative connotations that go along with being a diva, but to me, being a diva is someone who takes care of herself, that looks fabulous, is always on point with her fashion, and doesn’t care what anybody thinks.”

Paige reacted to the article as well with a similar sentiment.

You do realize both these ladies were the OG ladies to help kickstart the #givedivasachance trend? I know because i was part of it. They deserve to be apart of everything and more, they are the one of the leaders of the movement. Sometimes matches all wont be “crisp” https://t.co/HZOkBj93If

But it happens with everyone. Crappy article. Not just for them but for the “divas” you described that shouldn’t be apart of it, is an unfair statement. Without the divas, there wouldn’t be superstars. Thanks to all the ladies that paved the way before us. https://t.co/HZOkBj93If

Nope wrong again, I was in that match. #GiveDivasAChance was not started because of bad matches, it’s because the matches were short, they wanted to see us have LONGER ones. https://t.co/1Uz68SFI3d

The Bella Twins ‘liked’ their remarks and apparently responded to the article with the following: