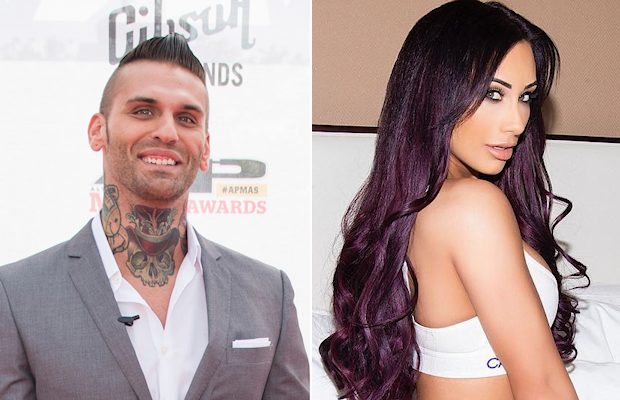 Corey Graves and Carmella seem to have grown more comfortable bringing their relationship to the forefront of the public eye, as Graves posted a photo this morning on Instagram that shows the couple kissing inside a phone booth.

Carmella sparked rumors of her relationship status last Friday after she shared the first public photo of herself with Graves on Instagram.

“The goal is to laugh forever with someone you take serious,” Carmella wrote in the caption.

The goal is to laugh forever with someone you take serious. 🥰

On Monday, Carmella remarked on Twitter that Graves is “hot af.”

Back in February, Graves’ estranged wife Amy Polinsky took to Instagram to accuse him of having an extramarital affair with Carmella. Polinsky, who has since deleted her Instagram account, also posted text messages between Graves and a third party in which he allegedly criticized Polinsky.

However, there were reports that Graves and Polinsky were already separated when he began his relationship with Carmella.

During an appearance on The Bella Twins’ podcast in April, Carmella denied breaking up Graves’ marriage.

Carmella teased that her story with Graves “plays out” in the upcoming season of Total Divas.

Graves also took to Instagram in February, denying he cheated on his wife in a since deleted post. He also told Lilian Garcia on her podcast that the stories about his relationship were not right.

“The story that was making the rounds was not accurate,” Graves said. “It was made out of anger and emotion and it wasn’t what it looked like. I had been out of the house and living on my own for quite some time before that whole situation.”

In the same interview, Graves said he and Polinsky only stayed together for their three children.

“My wife and I had both agreed that because of having the kids it became the reason why we had stuck around longer than we should have,” Graves said.

“Just because of the kids, you don’t want to throw that upside down. My kids, especially my oldest, had told me, ‘Dad, the amount of time we get to spend with you now is more quality time.’ They see me roughly the same amount with my WWE schedule, which luckily they have grown up being used to my road life, so it is not that unfamiliar to them.”

Graves continued, “But now I feel like when I have my kids, it has to be the best possible quality time, whether we are going to a carnival, or to a movie, whereas when I was living at that house it was kind of like, ‘Oh, hey, you can watch TV with me,’ but I wasn’t being as good of a dad as I should have been because I was dealing with my own stuff. But now I feel like my life is in a much different place, so I think it allows me to a much better father and dad than before.”