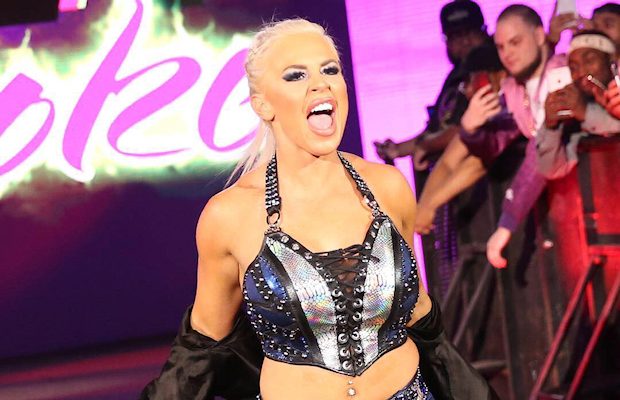 During an “Open Forum” with Sasha Banks and Bayley on Raw, Brooke, Mickie James, and Alicia Fox stormed the ring, but Bliss quickly seized control of the situation by sanctioning an immediate tag team match pitting Sasha and Bayley against Mickie and Alicia (which The Boss ‘N’ Hug Connection won, with Mickie suffering a decisive combo of a backstabber into a Bayley-to-Belly).

While setting up the tag team match, Bliss said, “Dana, you can stay out here if you want.” This upset Dana and she took to Twitter after the show to complain to Alexa about it.

Yes I think we have a little unfinished business … you tell me to do something n try to impress you & you dis’ me on national television.. wish someone could knock some common sense into you .. but oh wait no one can .. can’t be touched .. 🙄.. pic.twitter.com/1dVWdUEoGo

Brooke’s tweet drew a response from “The Goddess,” who threatened to not book her in anymore matches.

I liked the aggressiveness last week but don’t channel your aggression in the wrong direction or you won’t be on RAW at all…I’ll keep this little twitter rant in mind when I decide to book you in your next match … or don’t book you in ANY matches … whatever #CantTouchMe 😉 https://t.co/LuPUXSr0uX

Brooke seems legitimately upset about not wrestling on Raw. Following the show, she wrote on her Instagram Story, “Breaks my heart when I try and contribute as much as I can to something I am so passionate about.”

What will @alexa_bliss_wwe_ do with #RAW’s Women’s division next?

Brooke addressed the above Instagram post again as she wrote in the comments, “Never seems to fail .. forgotten and under used.”