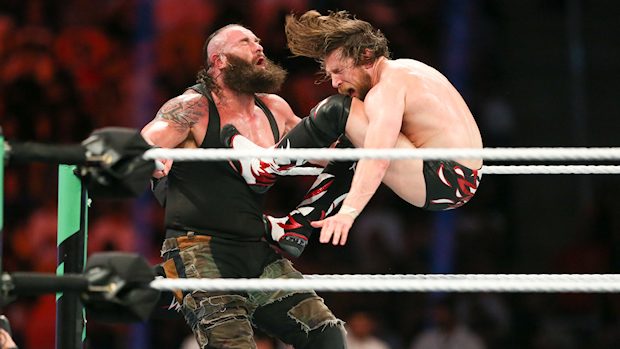 Daniel Bryan may not have won the first-ever 50-man Greatest Royal Rumble Match, but he did make history.

Mere weeks after returning to the ring following a three-year hiatus, the former WWE Champion set a record for the longest time spent in a Royal Rumble Match. Entering in the No. 1 spot, Bryan fought his way through all 50 entrants, making it to the final three.

Bryan was in the match for a staggering one hour and 16 minutes. This shatters the record previously held by Rey Mysterio, who lasted for one hour, two minutes and 12 seconds in the 2006 Royal Rumble Match, which Mysterio won.

Bryan was eliminated by Big Cass, who was tossed by winner Braun Strowman. He will have an opportunity to get some retribution against the big man, though, when the two Superstars collide at WWE Backlash on Sunday, May 6.

During a post-match interview, Bryan said the brutal chops Roderick Strong delivered to his chest fueled his fire to keep going in the 50-Man Greatest Royal Rumble Match.

“I haven’t wrestled Roderick Strong since 2009. This is the first time we’ve seen each other and the first thing he does is blister my chest up.”

Adding, “Not that he’s an old friend, but he’s an old rival. And I see him and he starts lighting me up and then it brings that fire back in you. And then you start to feel it a little bit more.”