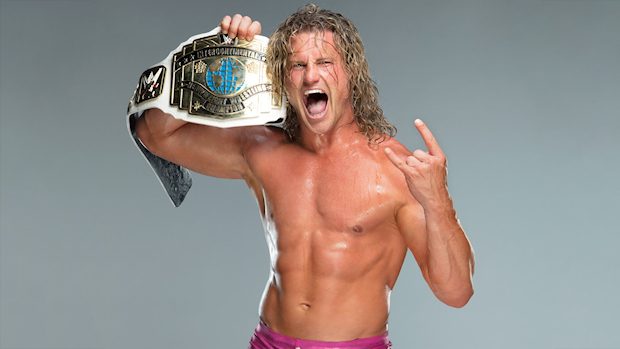 Dolph Ziggler recently spoke with Lilian Garcia on her podcast, Chasing Glory with Lilian Garcia, and among other things, revealed the original name WWE creative had in mind for him when he debuted as a singles competitor in September 2008.

Ziggler told Garcia, “So I randomly got a call saying, ‘You’re going to TV to introduce something. We’re going into a meeting right now, we’re letting you know now your name is David Diggler, what do you think about that?’ In my head, I’ve been fired twice, this is my last shot, I go, ‘I hate it, this is the “Reality Era” and I’m going to be David Diggler? Do I have any say in this?’ They go, ‘Well, we’re going into a meeting right now, if you can have something in 15 minutes, but it’s got to be a ‘D’ first name and a ‘D’ last name.” I texted everyone I knew and I tried to think of things. I knew a great great grandfather who was Rudolph and Dolph Lundgren was from Rocky IV and I needed a ‘D’ and I go, ‘Dolph?’ and then I go, ‘Is there any way I can not do Diggler at the end?’ So then I got to Raw and there was a little piece of paper that said, ‘Dolph Ziggler’ on it.

“They didn’t really have long-term plans for me which is fine, but I go, ‘Man, this might be my last chance.’ I found Vince [McMahon] and I go, ‘Vince, it’s “Reality Era,” we’re doing the stuff, you can Google my name, we can mix my name up and switch it a little bit. Dolph Ziggler sounds like a cartoon wrestling name!’ And he goes, ‘It’s different. People are going to remember it. I love it!’ And he walked off before he finished the sentence. I go, ‘Alright. I tried.'”

His revamped character debuted on Raw on September 15, 2008, where he introduced himself backstage as Dolph Ziggler to Raw General Manager Mike Adamle and Kelly Kelly.

On the June 18 episode of Raw, Ziggler beat Seth Rollins to win the Intercontinental Championship for the sixth time. He explained to Garcia what that means to him.

“I used to be like, ‘I don’t get these chances that other people get.’ And after 12 years and six championships, Intercontinental Champion, and plus a bunch of other stuff, you go, ‘I get the opportunity. I get them.’ We don’t always follow up on them, but that’s part of the business and sometimes you’re not meant to be a long-term person,” Ziggler said.

“Every time you get something, I go, ‘Wow, I was just focusing on being a tag team wrestler, which I haven’t done in years and became champion. How can I make this the most memorable thing I’ve done in the last 10 years?’ So I immediately went to work and I was focusing and I was watching different kinds of movies or studying different wrestlers from the 70s and 80s. I go, ‘How can I make this different?’ Because Seth’s done an awesome job. We’re not really tight, we’re not really close, but I know that he’s awesome at his job also and it’s great to see what he’s done with that title.”

Last August, Ziggler’s brother, Donald Nemeth, was handed a 15-year prison sentence after he was convicted over the death of a military veteran during a botched robbery. Ziggler revealed how he and his family are dealing with his brother’s incarceration.

“Its rough for us together, but we’re all talking to him all the time and sending him packages and stuff. It’s a bummer of course, but we’re in a group text together and we talk to him and say who talked to him today and stuff like that. The best part is, I think its made us all a little closer family-wise, so if you take something good from it, that’s that.”