The Dudley Boyz Announced for the WWE Hall of Fame - PWPIX.net

The Dudley Boyz Announced for the WWE Hall of Fame 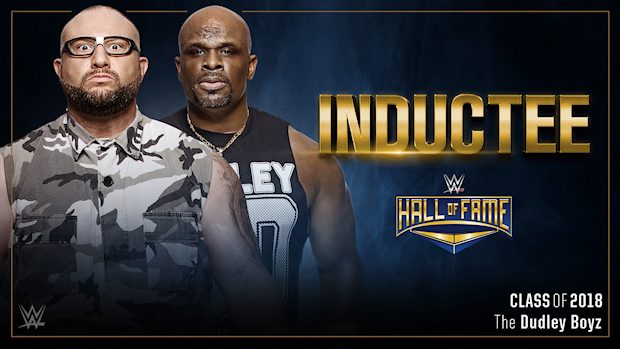 WWE has announced that The Dudley Boyz, Bubba Ray Dudley and D-Von Dudley, will be going into the WWE Hall of Fame.

The Dudleyz join Bill Goldberg as confirmed names for the 2018 WWE Hall of Fame class. The induction ceremony will take place on Friday, April 6th from the Smoothie King Center in New Orleans during WrestleMania 34 weekend.

The WWE Hall of Fame will need to stock up on tables because The Dudley Boyz are moving in.

As first reported by CBS Sports, Bubba Ray and D-Von Dudley are the latest inductees in the WWE Hall of Fame Class of 2018. They will be inducted, alongside Goldberg, during the 2018 WWE Hall of Fame Induction Ceremony on Friday, April 6, in New Orleans during WrestleMania 34 Week.

The Dudley Boyz’ journey to the WWE Hall of Fame began in Extreme Championship Wrestling in 1996, when Bubba Ray and D-Von, the sons of the unseen Big Daddy Dudley, were on opposite sides of a family feud among brothers clad in tie-dye and thick-rimmed glasses. Eventually, Bubba Ray and D-Von joined forces and kicked off two decades of tag team dominance.

In ECW, The Dudley Boyz were, perhaps, the promotion’s most reviled villains. Bubba Ray & D-Von could grab the microphone and antagonize audiences to the brink of full-scale riots. Once the bell rang, they were just as dangerous. With a predilection for punishing opponents by slamming them through tables and a devastating double-team maneuver known as the 3D in their arsenal, The Dudleys captured the ECW Tag Team Championship eight times before they left the land of extreme in 1999.

Bubba Ray & D-Von soon arrived in WWE, ditching the tie-dye for camouflage, but keeping the same nasty attitude that brought them success – not to mention a healthy stock of tables to drive their foes through. In WWE rings, The Dudley Boyz found a pair of teams just as willing to push competition to its extreme ends in The Hardy Boyz and Edge & Christian. The trio of tag teams turned the squared circle into their own demolition derby, using tables, ladders and chairs to punish one another. Their hardcore tendencies converged in the first-ever TLC Match at SummerSlam 2000 and led to a classic sequel on The Grandest Stage of Them All at WrestleMania X-Seven.

Ten years later, the 17-time tag team champions returned to WWE to compete with a new generation of Superstars, introducing teams like The New Day and The Usos to their brand of hardcore wrestling … and a few tables. Though they left WWE again in 2016, the WWE Universe never forgot them, as evidenced by the raucous reception they received at Raw 25 when Bubba Ray & D-Von arrived to put Heath Slater through a table with a thunderous 3D.

And now, The Dudley Boyz will take their rightful place in sports-entertainment history on what is sure to be an incredible night.