The Dudley Boyz on Getting Over with Tables, Working with Mae Young, TLC Matches, More (Videos) 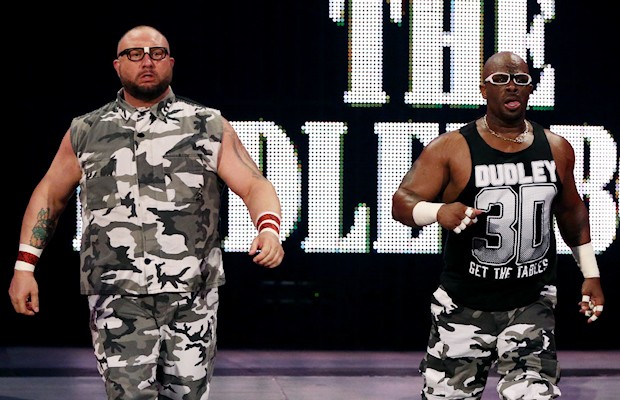 – Above is this week’s “Off The Top Rope” segment on ESPN SportsCenter with former WWE announcer Jonathan Coachman. Coachman looks at the Payback go-home edition of RAW with a video package but does not name the “Top Moments” like he had been doing.

In the videos below, The Dudley Boyz join Coach for an interview that was recorded on Monday before RAW in Hartford. Coach talks about going through a table years ago and Bubba Ray Dudley jokes about putting him through another. Coach asks if they ever thought tables would be what connected with fans. Bubba say they didn’t invent putting guys through tables but they took the idea and made it cool, made it special, and put some fan interaction with it. D-Von Dudley says they were known for starting riots and getting under people’s skin but it changed a bit when they came to WWE. Coach brings up Mae Young wanting to go through the table at 80 years old. Bubba says they put her through a table twice but everyone remembers the powerbomb off the stage. Bubba says he always joked that Bubba was the toughest man in the business. Bubba says Mae went to Vince McMahon and wanted to do a table bump off the top of a cage. Bubba says it was awesome to get to work with Mae, who he says helped them get over and became their friend.