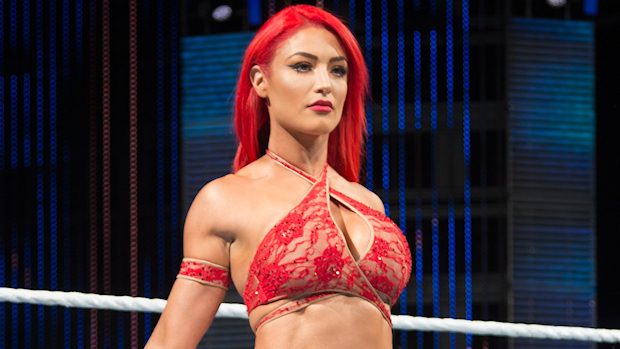 Could Eva Marie be returning to WWE?

The 34-year-old bombshell, who is now professionally known as Natalie Eva Marie, revealed during an interview last week that she’s had talks with WWE about returning to the company.

“There’s been a little bit of talks,” Eva Marie said during an interview with Collider Live.

After saying that she won’t be appearing at WWE Evolution, Eva Marie said, “Maybe afterward.”

“I would like to go against “The Boss,” that would be awesome,” Eva Marie said when asked who she would like to step in the ring with.

Eva Marie also put over The IIconics, saying they put in the work to reach the main roster. She starts talking about WWE at the 23:00 mark in the video below.

Eva Marie earned a developmental contract with WWE in early 2013 after impressing talent scouts during a four-week tryout and was assigned to the WWE Performance Center in Orlando, Florida to begin training. She debuted on the main roster in July 2013 since she was apart of the cast of Total Divas. She mostly accompanied The Bella Twins to the ring before transitioning to wrestling in October of that year. She continued wrestling off and on until September 2014, at which point she took time off from the road due to a ruptured breast implant.

In July 2015, Eva Marie began wrestling as part of the NXT women’s division. In March 2016, she returned to the main roster, officially becoming a part of SmackDown LIVE in July 2016. The following month, WWE suspended her for 30 days for violating their Wellness policy. She never appeared for WWE again before parting ways with the company in August 2017.

Since parting ways with WWE, Eva Marie has been focusing on her fashion line, NEM Fashion, and her recently launched podcast, The Natalie Eva Marie Show.