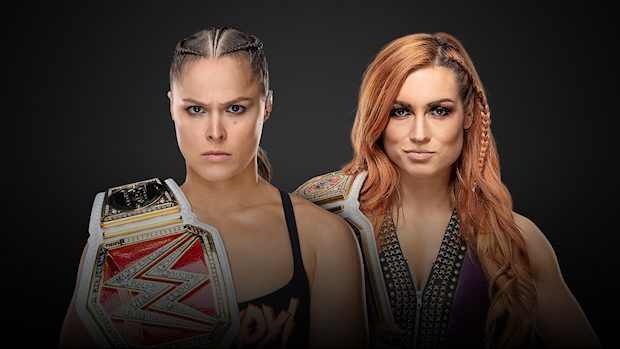 The first match is official for Survivor Series.

It was announced on Raw tonight that Raw Women’s Champion Ronda Rousey will face SmackDown Women’s Champion Becky Lynch in a Champion vs. Champion Match at Survivor Series. Their respective titles will not be on the line.

WWE aired a video on Raw of Lynch confronting Rousey after Evolution (while Rousey was speaking to Charly Caruso) and both said they would be seeing each other soon.

It would appear that WWE originally planned on setting up the match by having Lynch attack Rousey after Evolution went off the air. WWE.com’s preview for their match says Lynch “unleashed a vicious assault on her fellow champion backstage” after standing side-by-side with the rest of WWE’s female Superstars at the end of Evolution.

“However, the Rowdy titleholder’s celebration was short-lived; just moments after she and Becky stood triumphantly side-by-side along with the rest of the female Superstars in the culmination of the monumental event, The Irish Lass Kicker unleashed a vicious assault on her fellow champion backstage.”

At the very least, this is a miscommunication error between WWE.com and the creative team. WWE.com’s preview for the match was likely written a few hours before Raw and they were misinformed on the angle. Another possibility is that the preview was written a few days ago and creative then nixed the assault angle, instead deciding to have Lynch and Rousey exchange words. It’s also possible that WWE shot Lynch assaulting Rousey after their confrontation but then decided against airing it on Raw.

WWE didn’t confirm whether or not all Raw champions will be facing their counterparts from SmackDown LIVE in non-title matches at Survivor Series (that was the format for last year’s show). WWE again called Survivor Series the one night of the year where Raw and SmackDown LIVE Superstars compete in head-to-head competition.