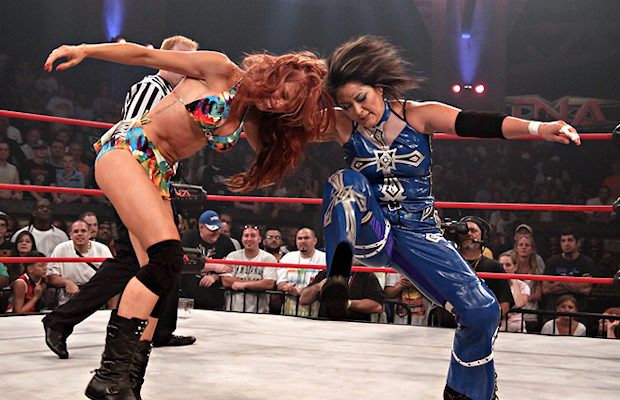 Ayako Hamada, a former TNA Knockout who wrestled under the name Hamada, has retired from wrestling after being placed under probation following her arrest for possession of methamphetamines.

Yahoo! Japan reported earlier this week that Hamada had been sentenced to 18 months in prison (the corresponding web page featuring the report has since been deleted).

Hamada has earned herself a year and a half in prison for use of “stimulants” at her home.#プロレス #WAVE https://t.co/PcbQtjjPT5 pic.twitter.com/wKO42EbfVh

Hamada’s sister, Xochitl Hamada, however, told Mediotiempo in Mexico that Hamada has been sentenced to three years probation. If she violates her probation, she could face 18 months in prison.

In a statement to media in Japan, Hamada announced that she is retiring from wrestling because of her legal situation. The 37-year-old said that she hopes to find work as an interpreter since she is fluent in both Japanese and Spanish.

Hamada was scheduled to wrestle that day in Osaka, Japan for Sendai Girls’ Pro Wrestling, but according to the Tokyo Daily News, claimed to another women’s wrestling promotion that she worked for, Pro Wrestling WAVE, that she was being held at knifepoint by four men. A representative from the promotion then alerted police, who found her in her apartment, “rambling incoherently and behaving in a strange manner.”

It’s unknown exactly what substances were in Hamada’s system at the time of her arrest, but a urine test turned up positive results for “kakuseizai,” which in Japan is used as a general term for stimulant drugs. The term is also used to represent stimulant drugs such as cocaine and methamphetamines.

Hamada admitted to the allegations. According to police, she was quoted as saying, “I inhaled [the drugs] through my nose.”

Following her arrest, Hamada’s contract with Pro Wrestling Wave was terminated since it’s company policy to immediately cancel a contract after a wrestler is arrested and charged. She was also stripped of the Sendai Girls World Championship.

Hamada is the daughter of legendary Japanese wrestler Gran Hamada. After making a name for herself in Japan and Mexico — Hamada is half-Mexican — she joined TNA in 2009. Her run with the promotion lasted about a year and was highlighted by two Knockouts Tag Team Championship reigns (one with Awesome Kong and the other with Taylor Wilde). She left the promotion in late 2010 after requesting her contract release. Since then, she’s continued wrestling in Japan and Mexico.

Here are a few of her matches from TNA.