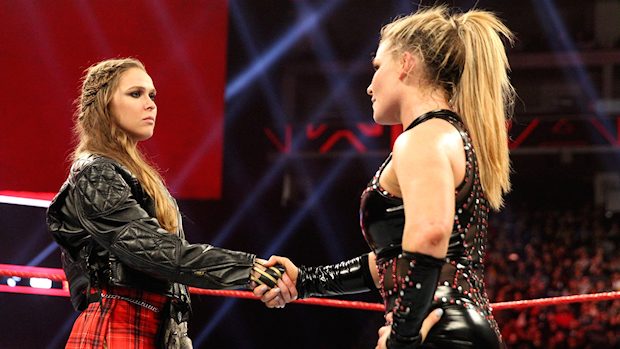 Four matches are set for next Monday’s Christmas Eve edition of Raw including a title bout.

On tonight’s show, Natalya won a Gauntlet Match set up by Stephanie McMahon to earn a Raw Women’s Championship Match against Ronda Rousey. As the match went on for the duration of the third hour, it eventually boiled down to Natalya (who beat Ember Moon and Ruby ) and Sasha Banks, who entered the match last. After trading submissions, Natalya scored the submission win with the Sharpshooter.

Bobby Lashley and Elias will battle in a Miracle on 34th Street Fight, which is a street fight filled with Christmas items. They have been feuding over the last several weeks by attacking one another with Elias’ guitar. Elias cracked a guitar over Lashley’s back tonight.

Dolph Ziggler, Drew McIntyre, and Finn Balor will face off in a Triple Threat Match. All three Raw Superstars have had bad blood with one another in the last few weeks, and it was McIntyre who came to the ring tonight to lay out both Balor and Ziggler during their match.

Baron Corbin and Seth Rollins will face off in a singles match. During tonight’s show, Corbin blamed Rollins for what happened to him at WWE TLC and mocked him for losing the Intercontinental Championship. Rollins responded by punching him out.

Paul Heyman will also appear on Raw to “celebrate the holidays.”

These matches are being taped tonight in Sacramento, California.