Home / Wrestling News / WWE News / Honky Tonk Man On Who Is The Best Talent In WWE, Not Being In The Hall of Fame, Cena vs. Styles

Honky Tonk Man On Who Is The Best Talent In WWE, Not Being In The Hall of Fame, Cena vs. Styles 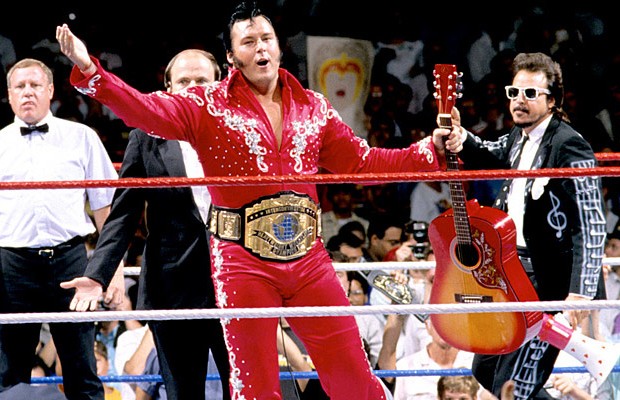 In this newly released interview, The Honky Tonk Man talks about not being in the WWE Hall of Fame, his favorite talents in WWE, AJ Styles vs. John Cena at the Royal Rumble, his health and more.

Highlights from the interview:

I wasn’t critical. With everything that they were doing and they did a lot of stuff in that match. It looked more like what you’d see in a video game. I’m a traditionalist. Traditional wrestling matches aren’t what they do nowadays. It was giving an opinion on what I perceived that the match looked liked to me. It’s not a match I would do because I’m not capable of doing that kind of match. They’re actually doing what the fans want. They’ve got sell-out shows; 70,000+ people attending Wrestlemania every year. Obviously they’re doing something very right.

It’s been good. At the beginning when the Network first came out I didn’t know it would be such a success that it has been. It has given us old guys and legends a whole new avenue of fans which is good.

Not being in the WWE Hall of Fame:

If it comes, it comes. If it doesn’t, it doesn’t. They have people that they choose at a certain time. It doesn’t affect my life at all. I mean it’s not like the sportswriters or the fans vote for the Hall of Fame. There’s no physical building. It’s not that big a deal. There’s a lot of guys that should be in that aren’t. Rick Rude is a great choice for this year.

Jimmy doesn’t have to suffer anymore. He was suffering through stomach cancer which is a terrible thing and his legal battles and G-d bless him he’s not suffering anymore.

Still being in good health at 64-years-old:

I partied as much as anybody else. It’s just the luck of the draw. Who knows when something is going to happen to you. We’re not guaranteed anything other than the breath we are taking now. It’s sad. Of course if you want to speed it up you can do some things that will probably cause it. Everybody’s body reacts differently to different things. I don’t think there’s anybody who partied more than 3-4 guys and I was talking about one of them in particular, Jake [Roberts]. Jake is a very very lucky man and he should get up every day, look up in the sky and thank someone. He’s done enough that he shouldn’t be around and he knows that.

Problems with Jake “The Snake” Roberts:

I don’t really have one other than the fact that he has said some bad things about me without even asking me about why he’s doing it. He thinks I tried to buy his name or trademark his name. He doesn’t have the rights to his name. He didn’t want to spend the money to trademark it so I was going to. When Vince trademarks people’s names, when he does it, they don’t get mad at him. He trademarks everything!

Current WWE Superstars that he is a fan of:

I saw Kevin Owens at an independent show a couple of years ago and I saw what he did in the ring and I wished him well. I knew he do really well and I’m glad he is getting a break.

Samoa Joe, he really deserves it. He’s toiled in the independents and around the world. After 10-15 years he deserves a chance to prove himself on the main stage.

AJ Styles is doing really well right now. He’s a breakout star from the new generation and that’s fun to see. And my trusted star, Randy Orton. I think he’s the greatest talent there. He’s an all-around talent. He can talk, he can work, he doesn’t put up with any nonsense.