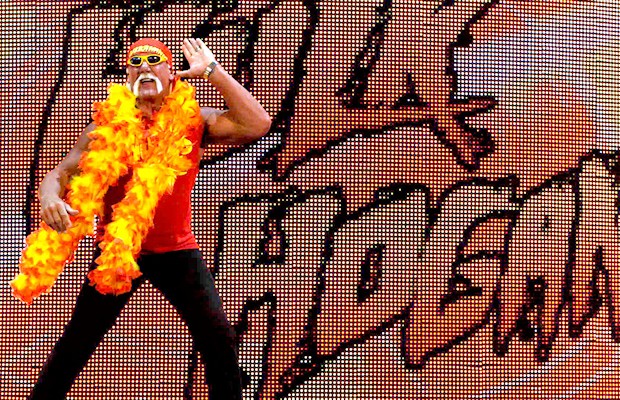 – WWE Hall of Famer Hulk Hogan recently spoke with Rolling Stone to promote WWE Tough Enough. The full interview is at this link. Below are highlights:

As someone who has been in this business for nearly 40 years, what were your initial thoughts about Tough Enough? Can a reality competition really take the place of years of training?

If you would have told me ten years ago that this was an avenue to make it into this business, I would have said you were nuts. When I came up, it was riding in the car 2,000 miles a week, wrestling for 15 bucks a night, paying your dues and learning your craft on the road. But the Performance Center has turned out some of our top stars; it’s proven that this formula works, so I’m excited that I’ve been reeducated to find the next WWE Superstar or Diva.

I’ve had to reinvent myself several times over the past 35 years; I’ve had to learn to roll with the punches – it’s not swallowing your pride, it’s being reeducated. And to see how this works, and how efficient the Performance Center is, it makes sense to me now. I go “OK, this is a much better way to do it.”

We’ve heard so much about the success of WWE’s Performance Center; in your opinion, what’s the secret to that success?

It’s pretty hardcore, brother. There’s several rings in the building, these kids are well protected and safety is the top priority – there’s doctors and therapists and trainers on staff; it’s not like when I had my first day and they broke my leg on purpose. And then there’s the art form; before Dusty Rhodes passed away, he was teaching a drama class, because you need to know how to tell a story, paint a picture with your face and your body. There’s interview rooms, where you learn how to talk on the mic, sell tickets and get your character over. It’s total one-stop shopping over there.

Look at the rise of Kevin Owens – isn’t his recent run proof that the business has changed?

Kevin actually reminds me of one of the older wrestlers of the late Seventies, some of those guys that didn’t have the build, but they would scare you if you met them at a bar. What hooked me about him was that I was watching a match of his on NXT and I found myself disassociated with being in the moment, all of a sudden I started watching him and he made me believe again. I watched real close, and there were no holes in his boat – his punches, his kicks, everything he did looked like it was killing the guy, which it probably was. He caught me with my guard down and he made me a believer again, he hooked me. He’s got that look, man; that demeanor and that swagger.