Latest Rumors On John Cena vs. Undertaker Rematch At SummerSlam 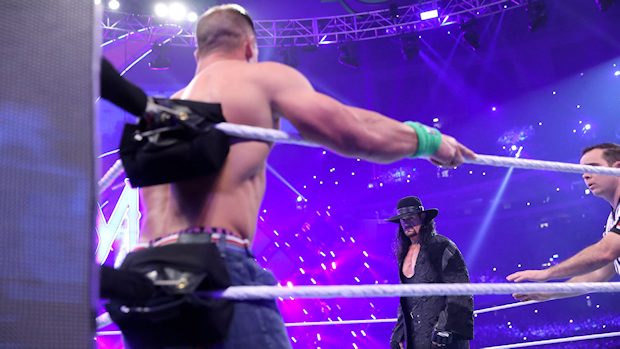 John Cena got what he wanted and then some when The Undertaker returned to WrestleMania 34 and routed the 16-time World Champion. Rumor has it they could be having a rematch at SummerSlam.

Cena got fans buzzing last week with an Instagram post hinting at a potential rematch with “The Deadman” after getting “buried” at WrestleMania 34.

Although Cena is not advertised for any upcoming WWE live events, a fan asked the Wrestling Observer’s Dave Meltzer on Twitter on Monday if he thinks Cena will appear at SummerSlam. Meltzer responded, “Rumor has it he will.”

Rumor has it he will https://t.co/yOJt5fxhrb

Meltzer mentioned in the Wrestling Observer Newsletter published on Thursday that a rematch between Cena and The Undertaker is being talked about for SummerSlam.

While discussing the card for SummerSlam, Meltzer noted, “The other match that has been thrown around has been an Undertaker vs. John Cena rematch. There have been no hints at all on television in that direction, but if they are going to do a rematch, this would be the show for it to make sense, and also give the show more of a special feel since Undertaker rarely wrestles on PPV if it’s not WrestleMania, and he did the last MSG house show.”

According to @TicketDrew on Twitter, who has connections with people in WWE and has leaked a number of rumors in recent months that turned out to be true, Cena will be wrestling at SummerSlam and it will be against The Undertaker.

Here is what he wrote on Monday.

For those asking yes, Cena will be competing at #SummerSlam unless something major switches that but very unlikely.

I said this almost 2 months ago, YES Taker and Cena will compete at #SummerSlam, draw your own conclusions.

As for the validity of @TicketDrew, he said two weeks ago that an all-women’s pay-per-view would be happening and that legends are expected to appear.

Yes, the all Women’s PPV is happening. #WWE

That announcement came on Monday, and WWE is advertising Hall of Famers and “Legends” (WWE’s name for former Superstars not in the Hall of Fame) for the event. Thus far, Trish Stratus, Lita, and Beth Phoenix have been confirmed to appear.

“While not confirmed, there is a lot of talk about Undertaker wrestling at SummerSlam,” Meltzer wrote.

The Twitter account @WrestleVotes reported on June 22 that a WWE source said that Undertaker got presented with a storyline that would lead to a match at SummerSlam. The idea is something Undertaker pushed for at one point.