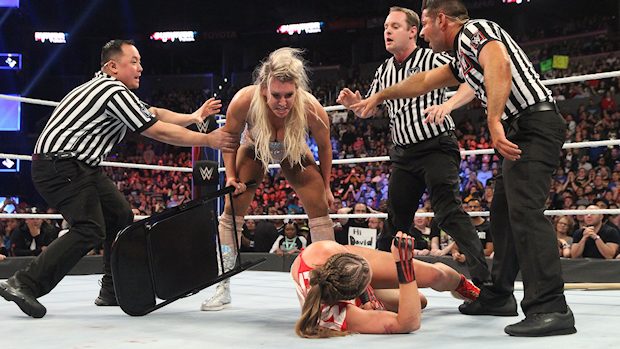 With Nia Jax eyeing her Raw Women’s Championship, Ronda Rousey must also contend with serious injuries sustained at the hands of Charlotte Flair at Survivor Series.

“The Queen” snapped during their Champion vs. Champion Match and pummeled “The Rowdy One” with Kendo stick strikes, a Natural Selection onto a steel chair and, after wrapping said steel chair around Rousey’s throat, a stomp that drove part of the chair into her trachea.

Dave Meltzer reported last week in the Wrestling Observer Newsletter that WWE planned on having Rousey face Becky Lynch one-on-one in the main event of WrestleMania 35. But following Survivor Series, it looks like their bout could be a Triple Threat Match with Charlotte.

While recapping Survivor Series on Wrestling Observer Radio (h/t WrestlingNews.co), Meltzer talked about Vince McMahon’s mindset behind the match ending in disqualification and the subsequent assault angle. Meltzer said Flair’s character has been cold since she began feuding with Lynch and the feeling among people in WWE is that they needed to do something big to generate buzz for her.

To add to this, John Pollock of POSTWrestling.com says that while some WWE officials were concerned with Charlotte getting booed, most were happy with the crowd response she received. WWE still plans on building up Lynch vs. Rousey for WrestleMania 35, but that could still change.

“In a follow up to the angle at Survivor Series, while there were some that were concerned Charlotte Flair would be booed, it was an attack designed for Charlotte to get over and it was relayed to me that they were happy with the response she received. The working idea is still to build up to Ronda Rousey and Becky Lynch at WrestleMania, but plans can always change if someone takes off and Charlotte Flair came off very strong on Sunday’s show,” Pollock said.