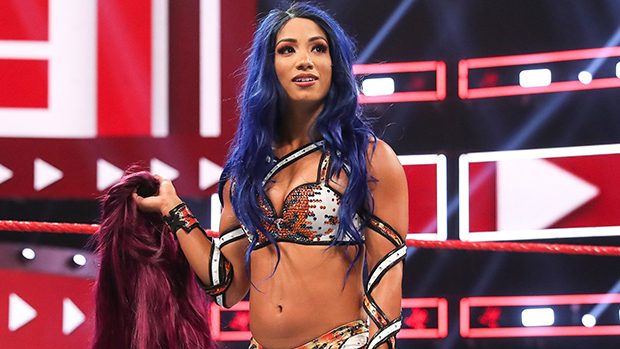 Appearing on WWE programming for the first time since WrestleMania 35, Sasha Banks reemerged on the Raw after SummerSlam, but it wasn’t the warm homecoming the WWE Universe might have been expecting.

Nearly one year to the day of the passing of her father (WWE Hall of Famer Jim “The Anvil” Neidhart, who died on August 13, 2018), an emotional Natalya addressed the WWE Universe, and “The Boss” made an unexpected appearance to seemingly console “The Queen of Harts.” Banks, however, instead sucker-punched Natalya, tearing off her purple wig to reveal her all-new blue hair and an aggressive new attitude to match, as she repeatedly pummeled the fan-favorite Superstar.

Becky Lynch, who defeated Natalya one night prior in their Submission Match at SummerSlam, rushed to the aid of her rival to bring the fight to Banks, but Banks fought off her fellow Horsewoman with a steel chair, repeatedly striking the Raw Women’s Champion at ringside.

WWE made a strong effort to keep Banks’ return a secret. Mike Johnson of PWInsider said he couldn’t get an answer from his WWE sources on her return.

“You gotta give WWE credit for this. I asked a million times. No workers I spoke to saw her. Nobody from behind the scenes that I spoke to saw her. No one from the creative team I spoke to had any inclination she was coming back that they admitted to me,” Johnson said on his audio show, PWInsider Elite ( Ringside News).

A few hours before her return, Wrestling Observer Newsletter editor Dave Meltzer reported that no one in WWE denied that Banks’ return was imminent, but they hadn’t confirmed it either.

It should be noted that WWE insider Brad Shepard said Banks would make her return this week, but wasn’t sure the show.

Sasha update: She’s there and she brought her ring gear. I’m still not sure if she’s doing anything tonight or one of the other shows in Toronto this week but I’d presume tonight (which was being written during the show itself) is not likely now. https://t.co/zIm5ABZQ74

Prior to Monday night, Banks stepped inside a WWE ring since she and Bayley dropped the WWE Women’s Tag Team Championship to The IIconics at WrestleMania 35 on April 7.

Wrestling Observer Newsletter editor Dave Meltzer was first to report that Banks tried to quit WWE after feeling “blindsided” over the creative team’s decision to have her and Bayley drop the WWE Women’s Tag Team Championship at WrestleMania 35. They were not informed until the day of WrestleMania 35 that they would be losing the titles to The IIconics in a Fatal 4-Way Match that also included the teams of Beth Phoenix and Natalya, and Nia Jax and Tamina.

WWE officials gave Banks time off as they felt her decision to walk away was a rash one. Meltzer reported in May that Banks had a private meeting with Vince McMahon and that issues between the two had improved. The expectation at the time was that she would return this summer. However, he then reported last month that her status had not changed since it was still “to be determined.”