Jeff Jarrett Announced for the WWE Hall of Fame - PWPIX.net

Jeff Jarrett Announced for the WWE Hall of Fame 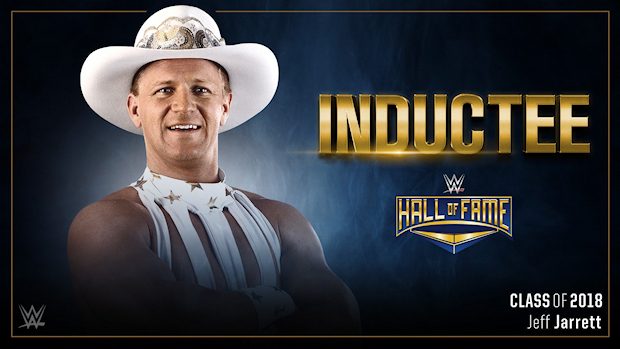 WWE has announced that Jeff Jarrett will join Bill Goldberg, Ivory and The Dudley Boyz in the WWE Hall of Fame this year.

Four-time WCW World Heavyweight Champion Jeff Jarrett is the latest inductee announced for the WWE Hall of Fame Class of 2018.

Jeff Jarrett used to have one question for the WWE Universe during his incredible career: “Ain’t I great?”

While fans responded with boos and jeers then, today, the answer is undoubtedly affirmative. As first reported by NBCSports.com, Jarrett is the latest inductee into the WWE Hall of Fame’s Class of 2018, joining Goldberg, The Dudley Boyz and Ivory. He’ll take his place in sports-entertainment history on Friday, April 6, in New Orleans during WrestleMania 34 Week.

Double J’s road to the WWE Hall of Fame began at birth. The son of Tennessee wrestling promoter Jerry Jarrett, Jeff grew up around the industry, eventually becoming a referee before competing between the ropes at the age of 18. While many promoters’ sons had entered the ring and flamed out, Jarrett was a prodigy inside the squared circle. It was easy to see that he would be a Superstar as he competed against and alongside the likes of WWE Hall of Famers Jerry “The King” Lawler, Nick Bockwinkel and countless others.

However, when Jarrett finally made it to WWE in late 1993, he revealed that he had dreams bigger than the ring: He wanted to use sports-entertainment to make himself the biggest star in country music. Ahead of his arrival, Double J strutted around Music City, USA – Nashville – running down the country music establishment and claiming that the WWE was his road to stardom in the ring and on the stage.

Jarrett found success between the ropes, capturing the Intercontinental Championship three times during a heated rivalry with WWE Hall of Famer Razor Ramon and picking up countless victories with help from The Roadie, much to the dismay of the WWE Universe. Double J eventually backed up his big boasts about his musical prowess, releasing his debut single, “With My Baby Tonight,” with a music video and live performance at In Your House 2 in Nashville. However, after Jarrett’s WWE departure, it was revealed that all wasn’t as it seemed when it came to the hit single – Jarrett was lip-syncing; The Roadie was the voice behind the song.

Nonetheless, Jarrett continued his in-ring career in WCW in 1996, becoming one of the few proud Superstars that can call themselves a member of the legendary Four Horseman. During his year in WCW, Jarrett defeated Dean Malenko to capture the revered United States Championship.

Double J returned to WWE in late 1997 and developed a new, nasty attitude that matched the era in the company. Though he lost his long blonde locks in a match at SummerSlam 1998, it did not deter Jarrett from achieving success, whether it came fairly or by bashing his opponents with an acoustic guitar. During this stint in WWE, Jarrett captured the World Tag Team Titles with Owen Hart and claimed the European and Intercontinental Championships on his own.

Jarrett jumped back to WCW in 1999 and found his greatest success as a competitor, defeating fellow Hall of Famer Diamond Dallas Page in the final of a six-man tournament to win the vacant WCW World Championship. Jarrett engaged in rivalries with the likes of Ric Flair, Booker T, Sting and others while capturing the WCW World Title three more times before the company was purchased by WWE in 2001.

Jarrett continued to compete around the world and also began to promote shows that gave future WWE Superstars like AJ Styles, Bobby Roode and Eric Young their first major exposure.

Double J’s resume is one of the most impressive in sports-entertainment history. He’s a four-time WCW Champion, three-time United States Champion, six-time Intercontinental Champion, European Champion and World Tag Team Champion. And during WrestleMania 34 Week, Jeff Jarrett will add one more accolade to that list: WWE Hall of Famer.