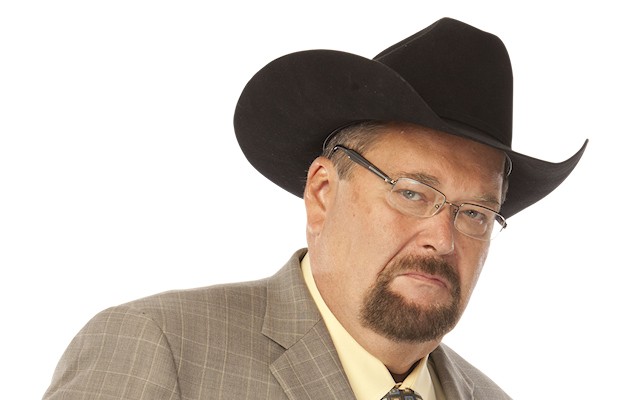 – WWE Hall of Famer Jim Ross recently spoke with Aaron Oster of The Baltimore Sun to promote his “Ringside” one-man show at Rams Head Live! on May 16th in Baltimore. The full interview is available at this link. Ross commented on possibly returning to broadcasting full-time and revealed plans for Jeff Jarrett’s Global Force Wrestling tapings:

WWE, no. There may be down the road some WWE opportunities, but I don’t think it will be in the broadcasting side. Time will tell on that. If the Global Force thing is there, I enjoyed working with Jeff Jarrett for the New Japan thing in January. I hope that they do great. I think that they can do a real good TV show with the roster they’re putting together. He still has to find a network to air his shows on. I would be very interested in working with Global Force, it’s just a matter of time obligations and budgets and everything. Everything has to fit schedule-wise. Adding 13 weeks of TV tapings, then going to Nashville and doing voice-overs, all of a sudden it becomes a pretty big project. And I have so many projects already in the pipeline. I just don’t know if we’re going to be able to balance everything to make that happen. I’m not against it, Jeff and I have talked about it. I just don’t know that I can do it because of the time obligations. I’m a big fan of what they’re doing there. As I understand it, it’s going to be 12 one-hour shows, and then a 13th final episode. I’m a big fan of the one-hour shows. The finale will be a two-hour special. I think that’s a good concept. There’s some real good wrestlers coming in as well. They’d be fun to call.

I just have so many commitments right now. I just signed a new contract with Fox in the past few days. I’m going to be providing digital content for FoxSports.com. That’s going to take some time. I’ll be doing some writing and other things in their digital platforms, which could lead to other things. Last Memorial Day I did the highest-rated boxing event that FOX aired. It got great ratings and they were happy with my work. They’re in the process now of talking with Golden Boy Promotions, Oscar de la Hoya’s group. Boxing is changing so much. There’s a concerted effort now to re-jump start boxing. Everybody is trying to get back in the boxing business. So we’ll see how that works out. I’m a big boxing fan, and I had a great time with that. I also got to call an MMA pay-per-view last fall, and that was fun. I got to work with Chael Sonnen [who is now going to be doing commentary for GFW] and that was a hoot. I had great chemistry with him, and I had a lot of fun with him. I like the different stuff, that I haven’t done before. It’s like a little adventure.