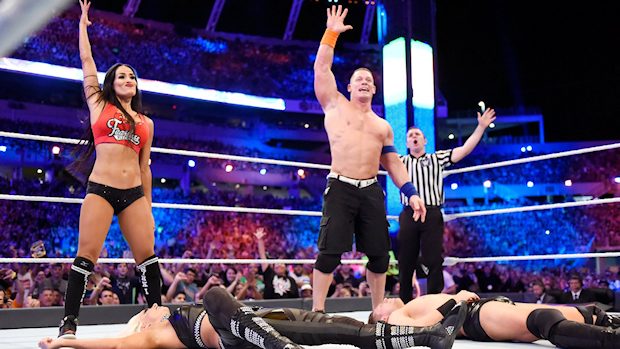 – Last year at WrestleMania 33, John Cena and Nikki Bella teamed up together as they beat rival power couple The Miz and Maryse in a WrestleMania Mixed Tag Team Match. Now they’re doing it again next month.

On Friday, Mar. 16 at a live event in Madison Square Garden, Cena and Nikki will face Mixed Match Challenge tandem Elias and Bayley in a Mixed Tag Team Match.

MSG released a video promo on its website advertising the match for the show. Cena was originally scheduled to face Elias in a singles match.

There is another change to a top match on the card as The Miz will no longer defend the Intercontinental Championship against Roman Reigns. Instead, The Miz, Bo Dallas, and Curtis Axel will team up against Reigns, Seth Rollins and Finn Balor.

Also advertised for the event is Brock Lesnar defending the Universal Championship against Braun Strowman and Kane in a Triple Threat Match. You can see the promo advertising these matches in the video below.

– Ahead of tonight’s SmackDown live event in Sacramento, California at the Golden 1 Center, members of the NBA’s Sacramento Kings cut WWE-style promos on each other.