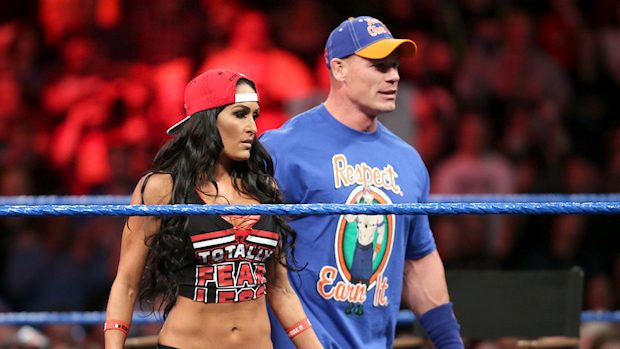 The WWE Superstar says he was expecting reporters to ask him questions about the split while promoting “Bumblebee” at CinemaCon in Las Vegas and decided he’s ready to talk about it.

“I love Nicole with all my heart and the split’s tough,” Cena said Wednesday an interview with TMZ Sports.

“I’m gonna get through it. I love her. I’ll always love her.”

“The fact that my heart hurts for her … I know I was in love. So, I’ll always have that.”

The event marked Cena’s first public appearance since announcing his split from Bella on April 15. The couple of six years had set a May 5 wedding date after getting engaged at WrestleMania 33.

Nikki has yet to speak out about the breakup, but Brie told PEOPLE she “didn’t see it coming.”

Still, “I will always love John as a brother, and I will always look at him like that,” she said. “If one day our relationship fades, then so it does, but as of right now I want to be there for him as much as I’m there for my sister. And Nicole respects that. He will always be family.”

A source previously told PEOPLE that the couple had clashed over Bella’s desire to tie the knot in the first place and eventually have children.

“He never should’ve proposed, let alone in front of millions of people. Now she’s heartbroken,” the source said. “This was supposed to be the happiest time of her life. He ruined it and blew everything up.”