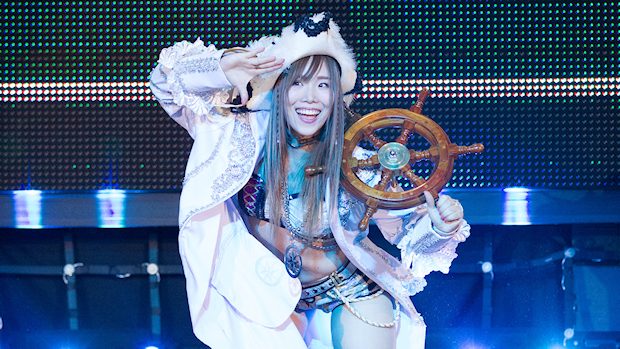 After being subjected to some racially charged taunts at Thursday’s WWE NXT live event in St. Petersburg, Florida, Kairi Sane has responded with a message of kindness.

According to a fan in attendance, some fans yelled “Happy ending” and “Pearl Harbor” at Sane (as she wrestled Rhea Ripley).

Douchebags saying “Happy ending” and “Pearl Harbor” at @KairiSaneWWE should be removed from the facility. Their tickets should be confiscated and their credit cards should be blocked from buying future tickets. @WWENXT #NXTStPetersburg

Another fan in attendance corroborated the taunts, saying that a guy yelled “Remember Pearl Harbor” at Sane.

To the guy who yelled, "Remember Pearl Harbor" toward Kairi Sane at #NXTStPetersburg…. I'd like to meet you outside and personally show you how we treat women, let alone Japanese women. You're a piece of shit and I'll spit in your face.

Sane responded to @FLWrestlingFan with this clip art of kids around the world holding hands.

Sane picked up a win in St. Petersburg, pinning Ripley after nailing her with the Insane Elbow.

2018-2-22 #NXTStPetersburg Match 7: Kairi Sane picks up the win over a vicious Rhea Ripley. Here Ripley manages to counter Sane’s elbow drop with a drop kick of her own. @WWENXT pic.twitter.com/5YyCbKJDK8

2018-2-22 #NXTStPetersburg Match 7: This is the elbow that Rhea Ripley did not avoid. Kairi Sane gets such great height on this move that I was a little worried about the ceiling… @WWENXT pic.twitter.com/fXpAMVDxYj