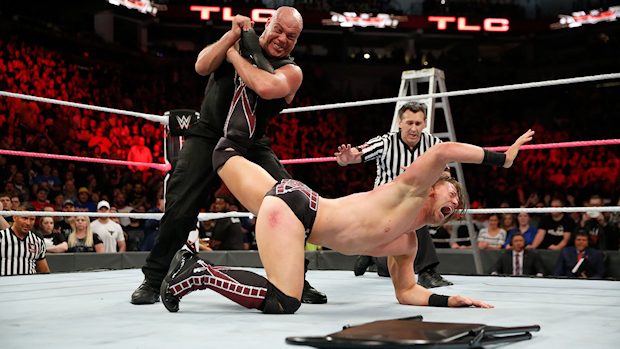 – WWE Intercontinental Champion The Miz will be playing a game of WWE 2K18 against musician Zakk Wylde at the Loudwire Music Awards tonight in Los Angeles at The Novo. As noted, Chris Jericho will be hosting the first-ever Loudwire Music Awards, which will air on AXS TV at 7pm PT. Below is a promo for The Miz vs. Zakk Wylde:

Will @mikethemiz defeat @ZakkWylde​BLS in the @WWEgames match of the century? 🔥 Tune in to @axstv tomorrow night at 7pm PST to find out 👊 pic.twitter.com/FeNhbUUS5q

– WWE taped the following matches on Monday in Green Bay for this week’s Main Event episode:

– As noted, The Rock tweeted WWE Hall of Famer Kurt Angle before Angle’s ring return at Sunday night’s WWE TLC pay-per-view. The RAW General Manager replied on Monday, as you can see below:

Thank you Dwayne. Felt great coming back. 17 years ago to the day of TLC, you and I tore it up at No Mercy. Much appreciated. https://t.co/7rAIOe3OnQ